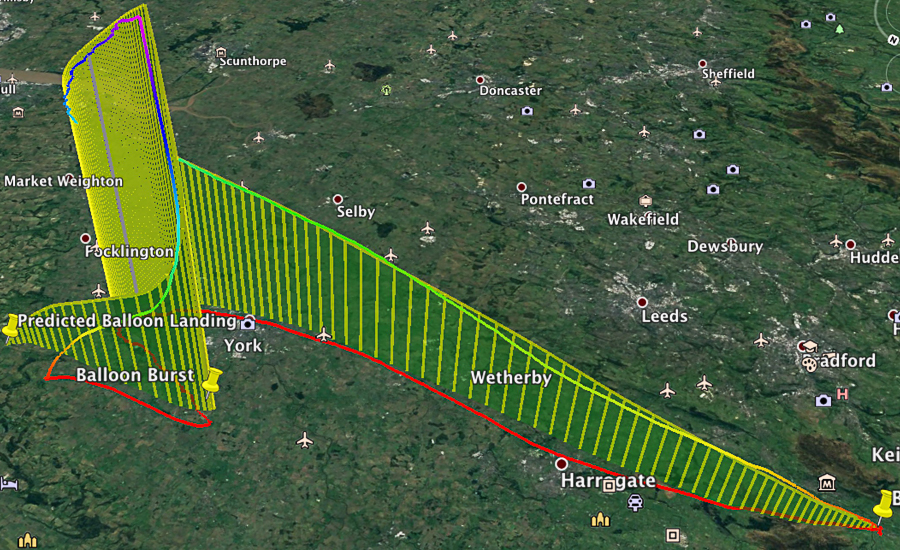 With the weather occasionally calming down, we’ve been able to get outside and perform some more tests of our gear for Equal Experts Space Agency.

For our most recent balloon flight  – our third – we sent a weather balloon up to 30,000m to release a toy glider, using the release mechanism and scripts we’ve written. Specifically, we wanted to test the following:

Incidentally, if you’re curious  to know more about the scripts controlling our flights, you can view our code at the project’s Github.

Here’s how it went

The nature of this enterprise is that there’s often an unforeseen complication, and so it proved this time. When we retrieved the gear, we found the flight logs – informative data on how the flight is progressing – hadn’t been recorded during this flight. Unfortunately, the SD card they are saved to corrupted. It’s fair to say this wasn’t a helpful development!

Still, as I’ve said before, identifying and solving these issues is the point of all this, and highly satisfying (and what makes it analogous to our work for our clients!). Here’s a rundown of the rest of our findings:

Servo motors: Positive news here. We tried standard grease in one motor and silicon grease in the other, and both seemed to have worked upon landing. Reviewing our onboard footage more closely confirms that both kept working as expected.

GPS/Barometer altitude: We can’t tell if it was the barometer pressure reading or the GPS height measurement that actually triggered the glider’s release, thanks to the loss of our flight logs. But we could work out the altitude at the time of release by combining onboard black box data with video evidence of when the glider was released. It turns out this happened at 29,851.3 metres – just 15 seconds before the blackbox recorded 30km. So between them, the GPS and barometer seem to be doing their job:

GoPro camera: Our footage from the Karma camera – which was carried outside of the payload – suffered from frozen condensation on the lens. Our GoPro Session’s lens didn’t have the same problem though. This is odd – but either way, we need to try to fly when humidity is lower (another aspect of the weather that so affects this project). On a related note, the gimbal holding the camera managed to survive the speedy spinning of the descent very well indeed.

Glider performance: The glider released and fell – extremely quickly! It seemed to catch the air and do what it’s supposed to (glide) before becoming too small to see from the balloon cameras, but there was a lot of tumbling before this. We want to experiment with releasing the glider from its tail next time, to see what difference this makes; for this flight, it was released with the tail down.

Working out the stall speed at 30,000m – and therefore, how far the glider has to fall before it can even out and fly horizontally – is one of our next tasks.

All in all, this was a pretty successful outing for our equipment. But one last aspect we hadn’t planned for was the speedy fall of our payload once the balloon burst. The latex from the balloon seemed to become tangled with the parachute, preventing it from opening properly. This meant the descent rate was faster than predicted and the payload landed a good few miles away from where it was supposed to – in a wheat field.

It was soon spotted via our drone (permission granted, of course). Next time, we’ll need a longer line from the parachute to the balloon, to try and stop this from happening again.