It’s bigger on the inside!

In large organisations there seems to be a painful reality that technology is horribly complicated. There’s much discussion as to whether this is an inherent and unavoidable reality or if it is inflicted on the organisation by a failing IT department.

In my opinion it’s neither. There’s nothing inevitable about labyrinthine IT solutions, nor do they necessarily arise as a result of incompetence. Far from it. Instead, they often exist to solve a complex problem, and complex problems require complex solutions. The one true failing of IT is in selling the idea that technology can perform the impossible magic of delivering complexity in a simple way.

I often talk about IT’s love of silver bullet solutions. Just like the werewolves they’re supposed to kill, these silver bullets are mythical in nature, not because we’re unable as technologists to keep things simple, but instead because we’re trying to fulfil an impossible promise. Somehow, despite failure after failure, the industry seems unwilling to learn this lesson. Attempts are even made to push the complexity down a level and refer to the adaptations required in these silver bullet solutions as “configuration changes”. The lure is attractive as the product now appears to be simplicity personified.

In practice, however, all that’s happened is that the complexity has been pushed back onto the customer who is now required to “programme” the solution to work to their specification. Vendors sell this as “putting control back into the hands of the business” but all we’re really doing is subconsciously punishing the user for daring to be complicated in the first place.

This is a “not my problem” solution.

Simple is as simple does

The answer to keeping things simple is simplicity itself, but simple is not the same thing as easy. The best way to demonstrate this is through example. Steve Jobs summed it up well in his statement:

“Simple can be harder than complex. You have to work hard to get your thinking clean to make it simple, but it’s worth it in the end because once you get there, you can move mountains”

It is from this source that my first example of simplification arises. In 1998 legend has it that Steve Jobs, in a moment of frustration, drew a simple grid on a whiteboard (see below). He then instructed his team to adhere to its simplicity. This instruction radically reduced the Apple product line to four key products, shelving all other offerings regardless of status or demand. The original number of products is not clear; it’s possible that even in 1998 it wasn’t clear, and it was this confusion that led Jobs to make the decision he did. (There were at least a dozen variants of the Macintosh computer alone). 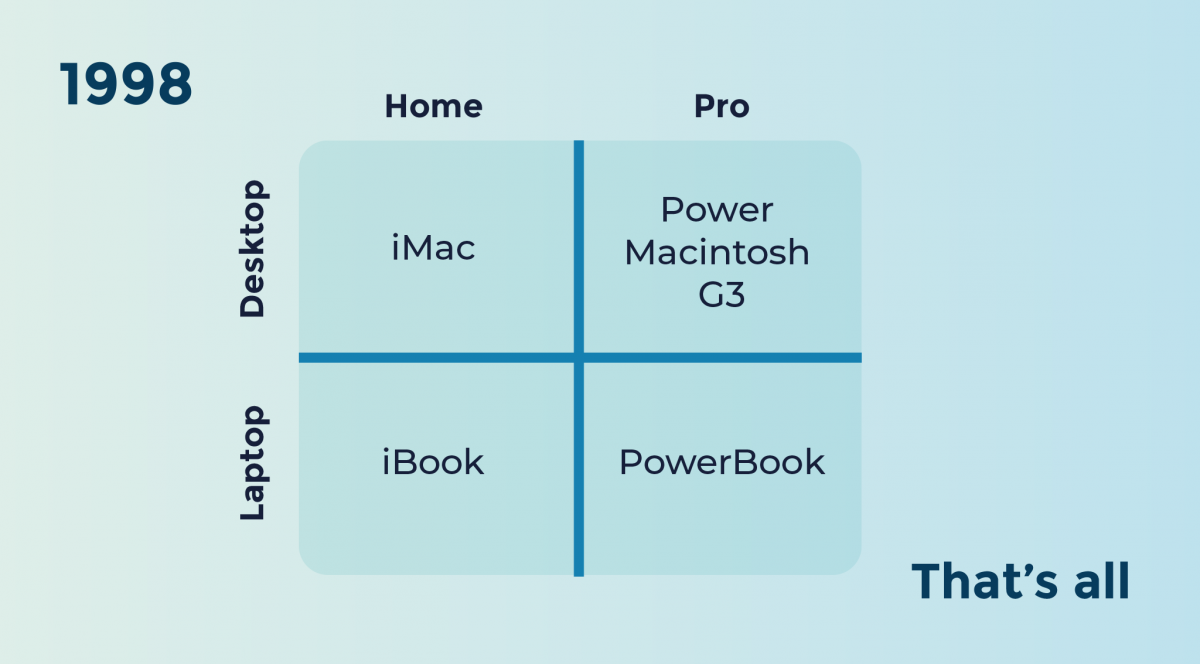 There is a smaller example much closer to home. In a past life, I would regularly attend presentations by members of the Cabinet Office GDS team. You didn’t have to be particularly observant to notice that they all bore a striking resemblance to each other. It’s almost as if they were following a style guide! Each slide contained just one simple sentence, and where the message needed to be more complicated they embedded a clear picture, or more often a well-crafted video. It always struck me that this approach focused attention on the presenter, simplified the message and improved engagement with the audience. More recently, whilst looking at mobile alternatives to desktop tools, it also struck me that this simplified approach to presentations removed the dependence on proprietary presentation applications.

I would hazard a guess that Steve Jobs’ example, although presented as being wise and well thought out, is less about evidence and more about gut. He made it simple because he liked simplicity, and just “knew” it was right. He made the technology simple by making the business simple. Similarly, there may well have been robust evidence based logic involved in the GDS style guide, or could it be those in charge just knew that a decision to be simple in approach had a ripple effect on the simplicity of the implementation.

In both cases, the key players did something that some seem to find radical. They made a decision, and the decision they made was to give the user what they needed, not what they were asking for (there is a difference). They gave them something that they hadn’t even realised they needed and as a result made them happy.

Henry Ford did this too. He is credited with many quotes relating to user (or customer) needs, but the one I’m going to repeat here is this:

“A customer can have a car painted any colour he wants as long as it’s black.”

I don’t think Henry Ford was being rude here, nor was he ignoring the customer; far from it. What he did, by simplifying his offering, was to simplify the solution. It was this type of gut decision making that allowed the early Ford motor cars to roll off a production line in volume and at affordable prices, giving the customer very much what they needed at the time.

So, to simplify the solution you have to simplify the offering, and to do that you need to simplify your business. You’ll need to make difficult decisions, and some of these will come from your gut. You will of course do all the essential stuff like user research, prototyping and you should definitely run trials, but at the end of the day simplification will come from the brave decision to create the offering you believe in. The offering that keeps your business simple, and hands the benefit of that simplicity to your customers in the form of an elegantly simple product.

You’ll offer this product to the customer, and trust in the fact that they’ll love it because it’s what they needed, and because you knew what you were doing, and why.