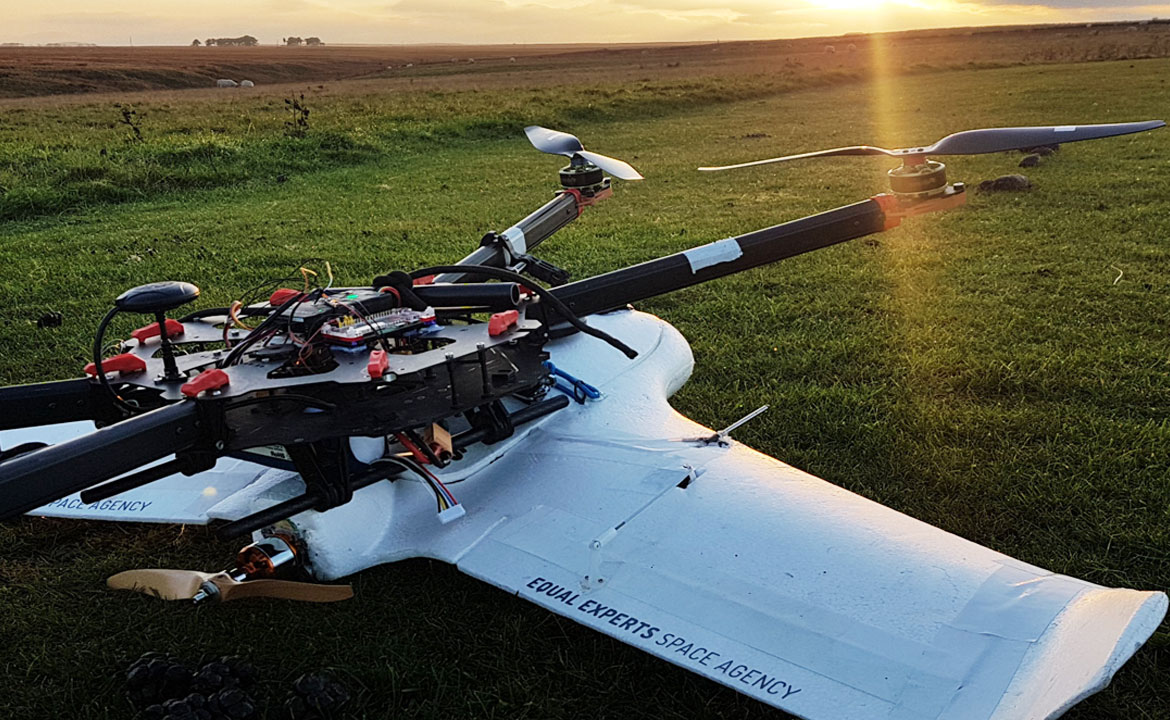 Our attempt to break the record for the highest altitude in horizontal flight by a UAV ran into red tape earlier this year, so over the last eight months we’ve been getting the right certification and training, and looking for a new launch location.

For those who are new to the story, Equal Experts set up EESA (the Equal Experts Space Agency) at the beginning of 2017 to support me and my colleague Nick Porthouse with a side project we were working on with my local Scout group. Our plan was to release an autonomous UAV (unmanned aerial vehicle) from a balloon at around 30,000 metres – which would be a new World Record.

One of the things that’s held us back has been safety and accreditation. While we had the right documentation to launch a balloon to the stratosphere, the CAA (Civil Aviation Authority) told us that because we were planning to use a UAV out of line of sight and go higher than 10,000 feet, we’d need a transponder and Safety Case. Once we had that, we’d need to become a registered aircraft with its own callsign, much like any airliner. We’d also need to train up four people so that any of the core team would be able to land the UAV in the event of an emergency.

To help us with the right documentation and accreditation, we teamed up with Euroada who are experts in this field. Since then, the Safety Case and Operation Manual have been progressing nicely, and once those are finalised, we can ask an aviation authority to become our own air operator.

Another issue we’d come up against was location. To release a balloon with a UAV attached, we need large open spaces, and those are at a premium in the UK. With that in mind, we approached numerous aviation authorities overseas, and Iceland’s was the most positive about us doing it.

Nick and I followed this up by going to Iceland for a lightning tour of 21 potential launch sites. Over one day, we drove over 800km and managed to survey all but one of the locations – thanks in no small part to the amazing organisational skills of our colleague Anca Constantin. We visited one Scout centre in particular (there’s a reciprocal arrangement between all Scouts internationally that lets you use one another’s facilities) that even has a reservoir next to it. This would help us enormously with our emergency protocols (ie in the event of a crash landing) if the UAV can’t land at its designated site. They also have a boat, which is handy.

The next hurdle is training. The four of us training to be UAV operators (me, Nick Porthouse, Anca Constantin and Paul Jennings) are planning to meet on the moors in North Yorkshire to familiarise ourselves with the aircraft and its safety / emergency procedures so we can get the safety certification. We’ll be supported by my Scouting son Alex, and by two other colleagues from the Equal Experts office in Manchester, Inga Gircyte and Shaun Stephens.

Most recently, Nick and I went to the ExpertTalks India conference in Pune to share the news and latest updates on EESA. A massive thanks to everyone in Pune for having us and making us so welcome, and to everyone who organised it. The set-up was the best we’ve had for a talk.

While in Pune I ran a workshop to help us with our Safety Case, during which we created a Docker container, with Python running against it, that we could test each code change with. We’re especially delighted that three of those who attended the workshop have now signed up to help us more in their spare time.

So that’s it. We need to complete the documentation, register the aircraft, get a call sign, get trained up then send the Safety Case to the aviation authorities in Iceland. If they then say yes, we’re good to go, and the great news is that a Safety Case would usually then be applicable for anywhere in the world – so we could spread our wings and head further afield. In fact, we’ve learned that the law has changed to allow Indian nationals to fly drones in India, which opens up the possibility of launching there with the help of our Equal Experts colleagues. Similarly, our team in Australia is looking into the possibility of launching there.

Watch this space for more updates next year!