The best way to understand something is by example, so to explain the Map we’d like to share a journey with you; a journey that explores diverse regions of the Map, charting where troubles were encountered, but ultimately great success was found.

As our first foray into the use of the Map to chart organisational exploration, let’s talk about a company that’s been on a long and interesting transformation journey – Nintendo. Founded in 1889, the company began by selling handmade playing cards used for gambling (their official history skirts carefully around this issue).

We can therefore place Nintendo’s origins firmly in the Home and Office region of the Map, which includes toy making. The fact that the cards could be used for gambling does not place Nintendo in that sector – it is the users of the cards who operate in that space. This is an important rule when using the map. The trade of those who consume a company’s products or services should not be conflated with that of the producer. 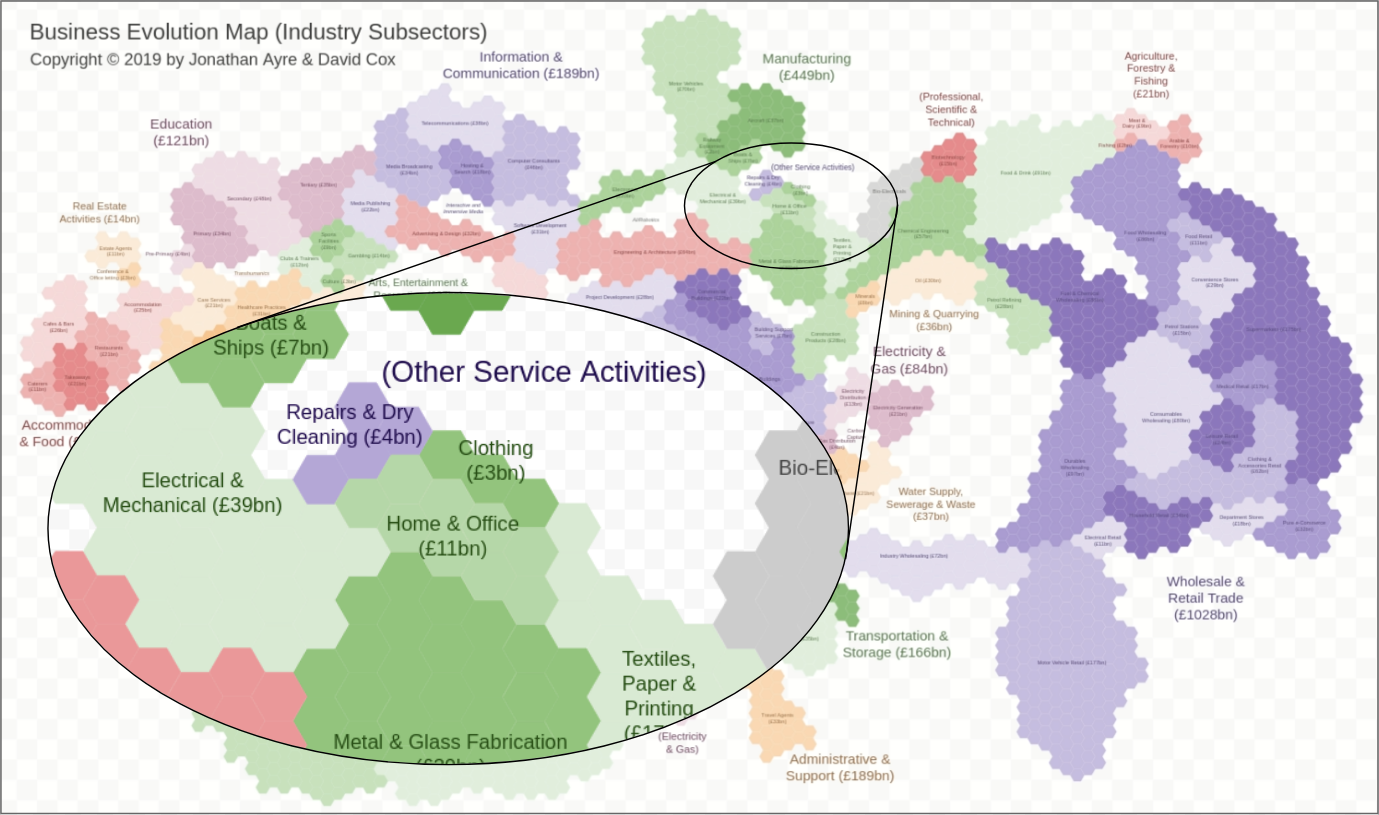 In 1959, some 70 years later, after Japan was opened up to the world following the end of the Second World War, Nintendo struck a licensing deal with Disney. This allowed them to include some of the latter’s characters on playing cards. Nintendo were very much playing to their strengths, staying within the same sector and leveraging a partnership with a different type of business to increase their own dominance in their area of expertise. The move was a game-changer, and the subsequent boost in revenue allowed the company to go public three years later.

During this time, ownership of the company passed down through various sons, cousins and nephews, and at the time of flotation was in the hands of a rather dissolute young fellow. With all this new money burning a hole in his pocket, he decided to ‘transform’ Nintendo.

He invested in taxis, instant rice, vacuum cleaners and even – dare I say it – love hotels. If we look at these journeys on the Map, each one involves a foray into an disconnected region. This is a situation for which our hypothesis predicts failure, unless treated as a genuine start up and given time to mature and grow (of the order of ten years or more). Despite significant resources at his disposal, the new owner failed to make a success of each of these ventures. 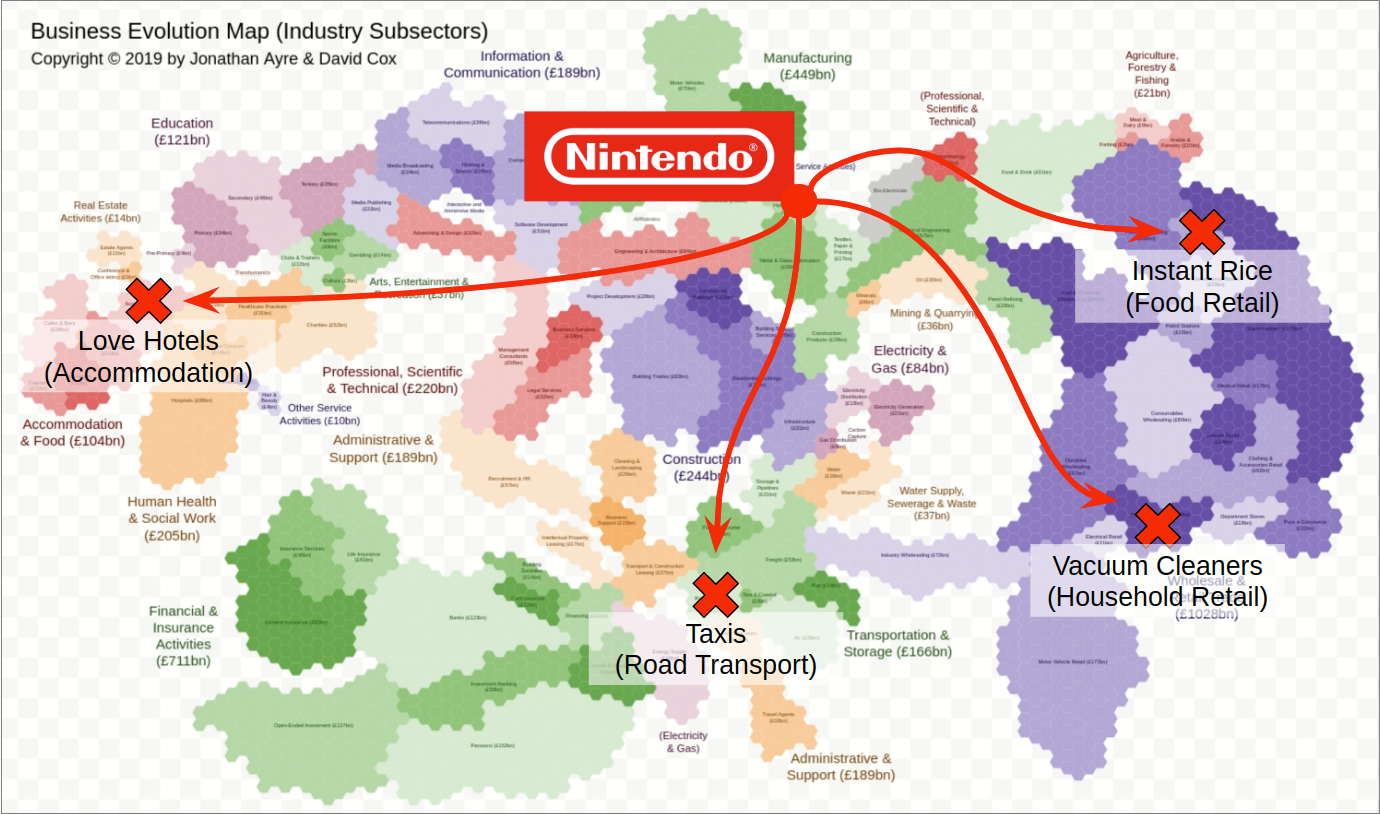 Only one idea stuck – making toys, born out of the company’s knowledge and expertise in making card games.  As electronic games turned out to have the highest margin, the 1960s and 1970s saw Nintendo experiment in this field, with many hits and misses. We examined these individually, and found that the progress of successes across the map was a logical one. The first real success came in the form of a mechanical arm known as the “Ultra Hand” which took Nintendo from Home & Office into the neighbouring territory, Mechanical & Electrical.

Another of the hits was a “light gun”, and in 1972 the first video game console was released (the Magnavox Odyssey), with Nintendo’s gun as an accessory for a shooting game. This established Nintendo in Electrical & Mechanical and started their move into Electronics as they became the exclusive supplier of the console in Japan, allowing them to build up their understanding of that market through partnership.

From the mid-70s to 1981, Nintendo used their knowledge of (a) video game consoles, and (b) the dynamics of card games to start making their own video games, culminating in Donkey Kong.  At the same time, they launched their own gaming device – the “Game & Watch”; this handheld console has an impressive legacy that can be traced via the Gameboy to the 3DS. With the company now well established in Electronics, the move into Software Development was strategically sound. The highlights of the journey look like this:

In 1983 came the great video game crash, which saw the US video game market shrink almost overnight by some 97%. To maximise short-term revenues, Atari dropped their standards and aimed for quantity over quality by allowing bad games onto their console. This culminated in the disaster of the ET movie tie-in game.

Nintendo watched the debacle with interest, learned from the mistakes of others, and as a result, applied a strong focus on quality. Only the very best games would get their seal of approval from now on. The company, in hard times, had shifted focus back to their foundation in games. This allowed them to succeed where other companies with a predominantly electronics background were less well equipped.

In 1985, nearly 100 years into their journey, Nintendo launched the Nintendo Entertainment System, or NES.  Again, you can trace a direct line from that through the SNES to the Wii and now the Switch (which also relates to Nintendo’s first console in 1981, by being designed to be portable).

A journey of some 131 years, and where actually have Nintendo gone in that time?  The journey from card games to video games is not a very long or complicated one – indeed, it’s an easily understood evolution, with failures learned from, and successes pursued.

In part 3, we will look more broadly at the territory Nintendo shares with many others, and demonstrate how they’ve managed to keep their share price rising whilst others in the same area are suffering. In doing so we’ll introduce an interesting bonus feature of the Map – the “inland seas” that predict emerging industry sectors, and show who might be best placed to move into them.