Twyn is an immersive entertainment app that allows users to engage with key influencers and celebrities through AI-driven one-to-one conversations. The voice-driven app uses a core Dialogue Engine to connect people with celebrities like Derren Brown through video content on specialist topics. It leverages natural gaps in the conversation, detects pauses, and suggests topics to keep the conversation moving. Artificial intelligence and machine learning is used to understand questions posed by the user in order to splice together a meaningful conversation from pre-recorded content snippets.

After 2 years of prototyping Twyn wanted to build an app good enough to take to market. Such an innovative product needed a flexible, experimental approach to test alternate hypotheses and technical options early. So began a partnership with Equal Experts to build and establish an iterative learning loop which allows for continual evolution of the product. 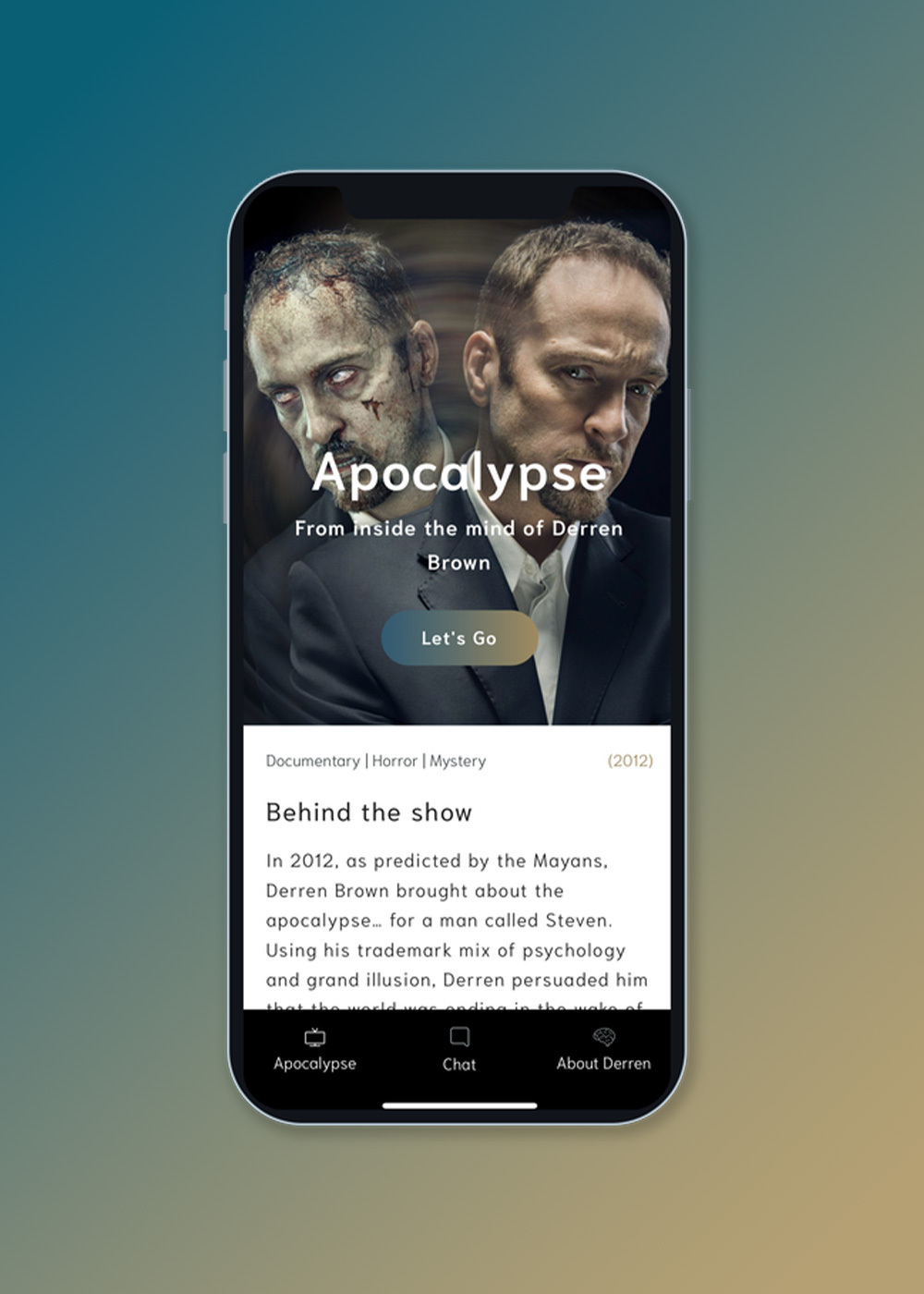 Twyn is a vision born and nurtured by Tim Levy and Jim Edmondson to capitalise on the intersection of two proven trends - use of social media, and enthusiasm for following celebrities. Twyn is billed as a “new era of conversation” between world-leading influencers and their followers.

The Equal Experts/Twyn team began the project with a 3-6-12 jump start. Breaking the project down into time-boxed initiatives forced us to quickly test ideas and mitigate technical unknowns before ramping up the fidelity for the next phase.

The first slice, delivered in just 3 weeks, was to build a steel thread allowing a user to open the app, ask a question of a `Twyn` and receive a response. This would involve things like Speech Recognition, a round trip to the Core AI platform and the nascent custom-built CMS.

By 6 weeks we had iterated on the early version and the team were able to validate technical concepts such as a Twyn `idle` state, the option to close a conversation, improvements to distribution and the ability to interrupt a Twyn.

By 12 weeks we had deprecated the early prototype and rebuilt the app with production-ready code into something that would ultimately be submitted to Apple’s App Store for beta distribution. Working alongside Twyn’s design partner from the beginning allowed us to build in high fidelity functionality in both user experience and design, at each stage of the 3-6-12 process.

Partnering with a celebrity Twyn to design the ultimate immersive online experience.

After the initial 12 week period, the team set a goal of releasing a standalone `powered-by Twyn` app to the App Store featuring the illusionist Derren Brown. The aim of this release was to get unmoderated feedback from real users on the efficacy of the Twyn concept.

During this phase we worked with the Twyn team to identify and prioritise the biggest risks to the success of the launch. For example, how would we know when the AI was good enough? How would we ensure sufficiently low latency? How would we avoid repetition from the Twyn?

As we tested further and gathered user feedback, we leveraged the app distribution platforms, App Center, TestFlight and App Store to deliver the capability to run numerous types of tests, both moderated and in the live public-facing app. The specific area of value for Twyn was to test the relevance of the AI responses, which we captured and used to train the model further.

We have since also developed a system of conversation links including feature toggles allowing the team to target different Twyns to different cohorts of testers via different distribution platforms.

As we worked through the initial 3-6-12 week roadmap and beyond towards the launch of the Derren app, it became clear that some degree of structured user research would prove beneficial for the team to understand how users were responding to the various app features. That’s when we embarked on a series of moderated experiments led by a dedicated User Researcher. Topics of interest included navigation, interactivity, narrative structure and conversation repair.

We facilitated this with an experimentation backlog in MS DevOps which allowed Product Owners to make sure we were testing the highest priority (or highest risk) items. Each experiment was refined in a similar way to a regular backlog item, with a hypothesis, a purpose and an agreement as to how it would be conducted. This ensured a shared understanding across all involved parties. We also ensured we had a Definition of Done, along with success metrics for each, which product Owners revisited weekly to ensure aligned and timely adjustments.

Delivering sustainable innovation – how Equal Experts supported the client to inherit a capability and delivery process they could own for future development.

The original concept was to build an app capable of hosting multiple Twyns, for users to browse and choose who they would interact with. As we worked with the Twyn team it became clear that we had multiple use cases that were differentiated enough to warrant multiple Twyn apps.

Working collaboratively with the entire Twyn team early in the product development lifecycle allowed us to develop a product that fulfils multiple validated needs. Tywn now has 5 apps powered from a single ‘core’ codebase. Each app has taken the learnings of its predecessors, along with the understanding from our user research. The outcome of this iterative approach is a user experience that is more likely to be commercially viable should Twyn decide to charge for content in the future.

The crucial factor in this project was to build products flexible enough to adapt to the Twyn team’s evolving objectives. To allow for the iteration towards a viable value proposition, the team have built a suite of apps powered by a flexible, bespoke Content Management System.

As EE exited the engagement in September 2021, the product, platform and tooling that exists today looks quite different from that which was originally envisaged. We have one app live in the App Store (Derren Brown), one ready to go live (a celebrity endorsed cycling-themed app), another in TestFlight to facilitate rapid testing cycles (Creator), a multi-Twyn app for investor demos and one in development due to go live in 2022 (a celebrity endorsed surfing-themed app) – five apps in total.

EE worked with Twyn closely to shape and support hiring of internal capability and a handover approach that allowed Twyn to inherit the delivery process and evolve the product going forward.

The CMS tool is becoming increasingly adopted by Twyn’s content production team, allowing them to upload and manage video clips, chapters, prompts and other app-specific content assets. It’s also an important tool for the conversation designers to understand user utterances and prepare new datasets to train the AI model.

The project to rebuild the app in Flutter is also well in progress and we have gone live with a ‘Let’s Speak English’ English language practice app. This will facilitate a wider user base.

The next important milestone will be in early 2022 when the plan is to release the surfing-themed app through Flutter to paid subscribers.

It was the cohesive approach across both the Equal Experts and Twyn teams in the very early stages, along with fast functionality testing afforded by the 3-6-12 model which allowed for this impressive evolution.

You can get the apps here: