Today’s most successful organisations are fast and flexible. They can deploy new features for digital services to meet rapidly evolving customer demands and market opportunities. They capitalise on first-mover advantage and sustain innovation: improving digital services incrementally through weekly—or even daily—deployments.

For many businesses, maintaining or achieving rapid time-to-market is a constant challenge. If the same is true for you, you’re not alone. We constantly hear the same type of complaints from many different organisations, at every level:

“New features consistently run late in delivery or get bogged down in approvals processes.”

“We don’t react to the needs of our customers.”

“The tech team is a constant bottleneck.”

In many cases, it may not actually be the tech team causing the blockages that impede your ability to deliver value, at pace, consistently. It could be the way your tech team is structured that’s the issue. And adopting an alternative operating model—called You Build It You Run It—could be the answer to your problems.

We’ve helped clients make enormous gains in deployment throughput by adopting You Build It You Run It: from 10 deployments a year to 4000+, without a correlating increase in production incidents.

So, how do you manage deployments in a You Build It You Run It operating model, and how does it differ to your—likely—current deployment process (often referred to as ‘Ops Run It’)?

Deployment in ‘Ops Run It’: the common, conventional IT approach. 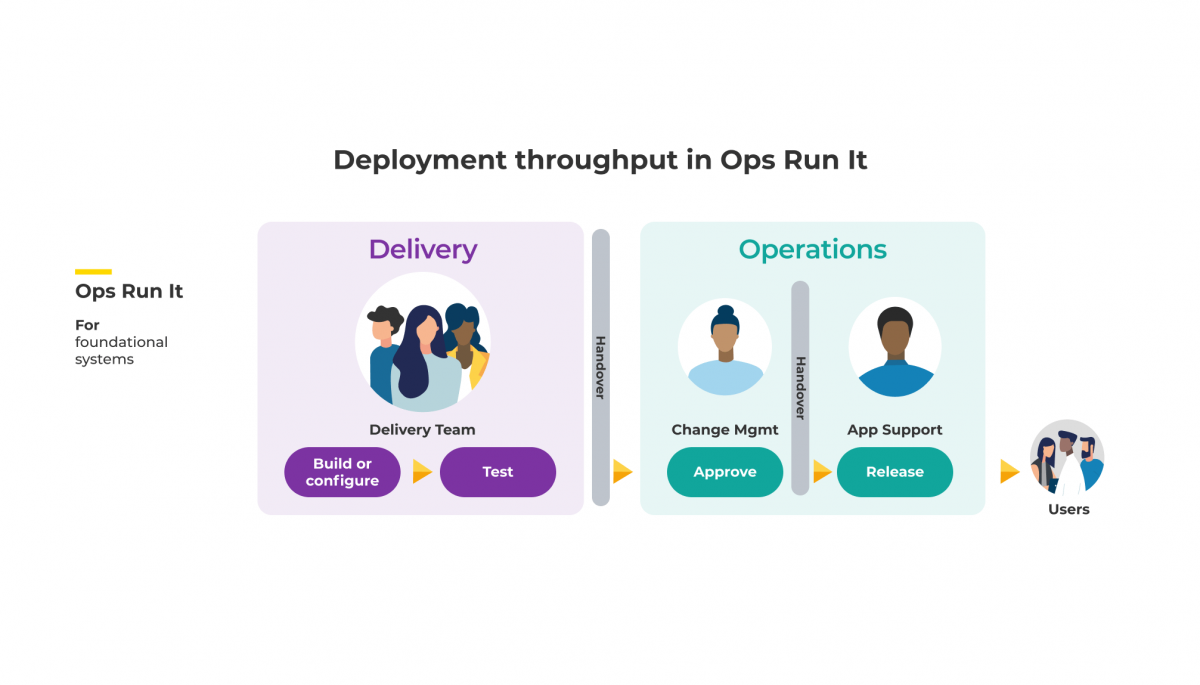 Many software teams use an operational model called ‘Ops Run It’. In this model, Operations teams are charged with the responsibility of deploying and supporting applications in production. The above graphic highlights a composite IT department, where Delivery and Operations function as silos.

In this approach there are many delivery teams building and testing software services. Once those services are built and tested, there’s a handover. In Operations, there’s a Change Management team running change-advisory board meetings (or CAB meetings) to ensure the services are stable and safe. Then, there’s an App Support Team doing the deployments.

How does ‘Ops Run It’ work in a day-to-day capacity?

What are the drawbacks in this approach?

Deployment in You Build It You Run It: how to launch new product features to market every day. 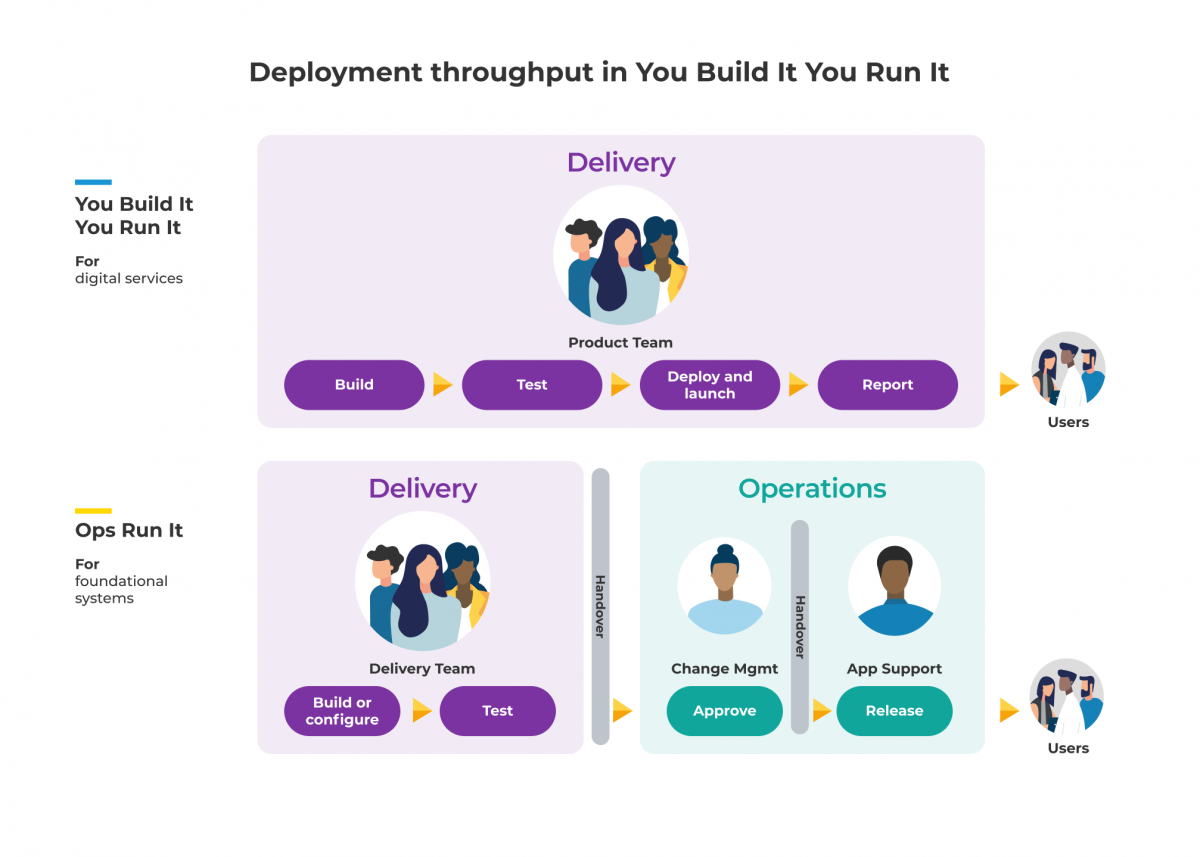 The above graphic shows a hybrid model.

It’s important to note that You Build It You Run It and Ops Run It are not binary propositions. It’s a common misconception that you can simply choose one model over the other and employ it universally. In most cases, you’ll have different models working together, because different services have different requirements. You should also frequently review your operating model depending on the maturity or lifecycle of the product/system you’re supporting.

Here, the Delivery team employs the You Build It You Run It operating model for all activity involved with developing, testing, deploying and evolving digital services.

The same Delivery team could be using an Ops Run It model—in conjunction with a central Operations team—for work associated with commercial-off-the-shelf software (COTS), foundational systems, or even mature digital products that require little intervention.

How does You Build It You Run It work in a day-to-day capacity?

In You Build It You Run It, an on-call Delivery team has total ownership over developing, deploying, monitoring and supporting digital services. As a result, there is no hand-off from Development to Operations.

The Delivery team has all the skills and context needed to do this across the entire lifecycle. It’s made possible by a loosely-coupled service-oriented architecture, and an automated deployment process.

In the You Build It You Run It operating model, the on-call product team will determine for themselves whether what they want to do is a regular, low-risk change. We trust they’re in the best position to make this call, because these team members have built the service and best understand the intricacies of its codebase.

If the Delivery team deem it is a regular low-risk change, they use a pre-approved change request process, and it’s managed by the team as a standard change. This process is extremely fast when implemented correctly—updates can be deployed daily to help organisations sustain innovation and consistently deliver value.

If the Delivery team deem it is an irregular or high-risk change, it goes through a normal CAB process with the same change-management team from Operations.

When a deployment happens, the Delivery team perform it themselves—at a time of their own choosing—and report their successful changes to the Change Management team.

Critically, this removes the bottleneck you see in Ops Run It where the Delivery team is dependent on the App Support team.

In You Build It You Run It, we also typically see Delivery teams being much more considered and cautious with their deployment times than an Operations team might be. This is because the Delivery team themselves are responsible for fixing any problems that arise from the deployment.

Often, in scenarios where deployment is automated and the architecture is built in a way that doesn’t require downtime for deployments, Delivery teams will deploy during the day to give themselves a working day to monitor for issues and implement immediate fixes as they arise. This, in turn, means fixes are provisioned faster and services are more reliable in general.

What are the benefits of this approach?

In the right environment, there are many benefits to You Build It You Run It. The top three we typically see are:

So how do I get started with You Build It You Run It?

Like many things, You Build It You Run It can be incredibly powerful when implemented in the right context. But it’s not necessarily the right approach for every organisation universally.

If you’re interested to learn more about You Build It You Run It—including whether it’s right for you, and how you can start to determine its suitability for your team —I’d love to set up a conversation.