Last year I posted a short video on how best to transform an idea into value, and concluded by referring to ‘Cromwell’s Law’ (in essence, the power of admitting you might be mistaken).

In these uncertain times, understanding whether you’re right or wrong, and when to change your mind, have never been more important.  If we’re to succeed by making better decisions, we need new ways of answering the ultimate question (according to Whitney Houston): ‘How Will I Know?’

Addressing this question saw me embark on a journey of discovery, informed in part by Organisational Psychologist Adam Grant’s work in ‘re-thinking and unlearning.’  During this blog post, I want to share seven important lessons.

Grant’s work explores an interesting concept that we’ve all grown up with: if you’re unsure, go with your gut.  It turns out there’s a name for this: ‘The First Instinct Fallacy’.

According to the research, the vast majority of people who reject their ‘gut instinct’ actually improve their results.  This is because intuition is based on pattern recognition, and as Grant reminds us: ‘The patterns we recognise from the past may not be relevant to the problem we’re solving in the present.’

Consider the pain you might have felt during a pub quiz; you have the right answer but change your mind to the wrong one.  The psychological truth is that the agony of changing your mind is much greater than sticking with your first answer, even if it turns out to be wrong.  This is why many of us find it so hard to change our opinion on something – we prefer the comfort of old ideas to the discomfort of new ones.

When considering effective decision-making, Grant examines the dynamics of Task Conflict and Relationship Conflict.  Most of us would agree that less conflict is better than more conflict – and that if we want success, team members need to get along. But some researchers have argued that

By contrast, high performing teams experience minimal Relationship Conflict and lots of Task Conflict.  My experience working with organisations of various sizes and backgrounds bears this out.  For example, successfully deciding which problem to solve relies on a small number of key factors.  The most important requires members of a multifunctional team to share their ideas with one another.  If the team can constructively (and robustly) debate different perspectives as they arise and listen to each other’s views, then they will make better decisions on the next best steps.

But how do we have that wide-ranging discussion – which inevitably includes disagreeing with one another and asking people to change their position – whilst remaining friendly and open-minded?

Lesson Three: How to Disagree without Being Disagreeable

Many years ago, I was given an elegant piece of advice by a senior colleague, who’d watched me try (and fail) to influence a decision in which I didn’t believe: ‘The trick is to disagree with people and keep them at the table.’

Take a moment to consider how you typically express yourself when you hear an idea with which you don’t agree.  You might say nothing (which as we’ve discussed indicates excessive Relationship Conflict and a lack of psychological safety).  Alternatively, you might say ‘I don’t agree’, before going on to describe your far better idea.  This tends to lead to a tug of war, draining huge amounts of energy to no end.

Recently, during a lively debate, a colleague said ‘I have an alternative viewpoint’.  It struck me as a fantastically polite and considered response.  Rather than saying ‘You’re wrong’ or ‘I’m right’, my colleague instead said: ‘I too have an idea I’d like to share and discuss.’  Next time you find yourself in a similar situation, give the tactic a try.

This mindset can also help us avoid another potential trap we might fall into when trying to re-think our position: the Totalitarian Ego.

By succumbing to our Totalitarian Ego, and closing ourselves off to counter-arguments, we enhance our pre-existing convictions, and prepare a hostile response to future attacks.  In short, we build tall, thick walls around our beliefs that over time can neither be scaled nor breached.

There has to be a better way. 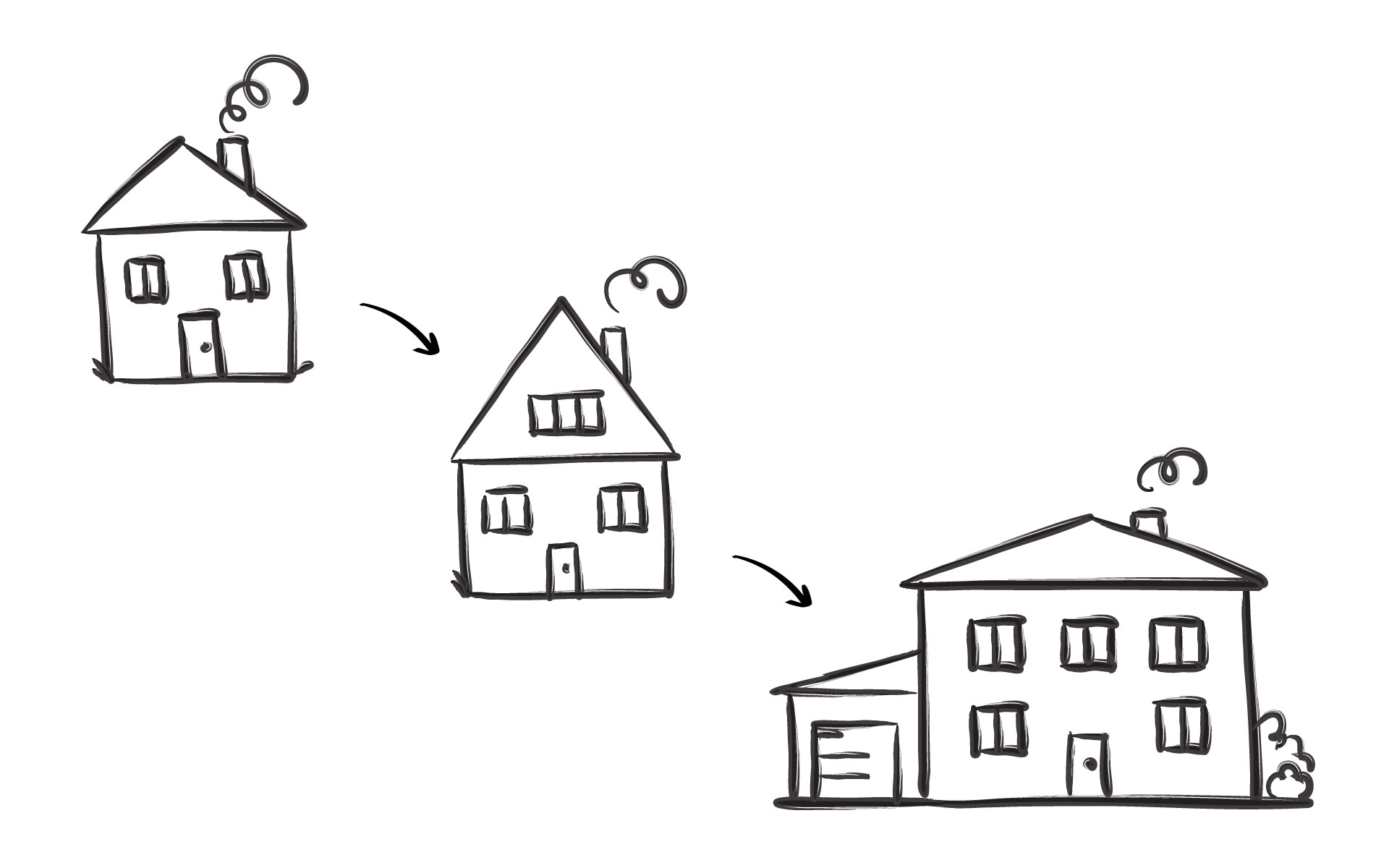 Grant addresses this conundrum by referring to the work of American Educator Ron Berger.  To encourage his students to think differently, Berger first asks them to draw a house.  If you’re reading this, please stop and give it a try (it doesn’t matter if you’re Michelangelo or not).

Next, share that drawing with three trusted people, and ask them to provide feedback.  Invite them to tell you what they like about your drawing, and ask for any advice on how to improve it.

Now, taking this feedback into consideration, draw three more versions of a house, all of them different.

Berger’s aim is to remind his students (and us) that just as you wouldn’t expect a great band to release their first run-through of a song, your first attempt can evolve and improve over time – especially when informed by constructive feedback.  Making this mindset (‘re-thinking is good!’) into a habit is a fantastic way to overcome the First Instinct Fallacy mentioned earlier.

Our first thought should never be our final thought.

Re-thinking is hard because we’re hardwired to resist changing our minds.  In some cases, the more we hear ideas that oppose our own, the more inclined we are to deny there’s an issue worth talking about in the first place.  We can so thoroughly dislike a solution that we utterly reject the existence of a problem.  This phenomenon is called Solution Aversion.

The archetypal example of this is the question of whether or not humans are having an impact on the Earth’s climate.  The evidence presented in favour of this position has proved so unpalatable to some that they’ve rejected the very idea of climate change.  This has led to individuals, groups and even governments adopting an entrenched position, and refusing to engage with alternative views.

This may explain why the biggest challenges faced by companies often receive the least attention.  Buried deep in the archaeology of all organisations are unresolved arguments that lead people to say things like ‘we’re not talking about that.’  Perhaps you’ve heard (or said) similar things about your own company.  But if we refuse to confront our most pressing concerns, they will eventually overwhelm us.

Lesson Seven: To Stick or Twist?

So far I’ve argued that being able to change your mind as the facts change is a virtue.  But on the other hand, so is persistence.  The most common question I’m asked by leaders is: when should I be flexible, and when should I stick to my guns?  Being resolute in our convictions can exemplify great leadership, whereas ‘flip-flopping’ can appear weak and ineffectual.  Surely it is better to be convinced than doubtful?

As with so much else in life, a balance must be struck.  My advice is to be fixed in your overall goals, and flexible in the strategies you employ to achieve them.  A leading retail organisation may have the goal of increasing conversion through their eCommerce shopping basket.  Thinking deeply and differently about how that might be achieved, informed by multiple perspectives, is the key to success.  And it might be that the first idea the team chooses to pursue is proven to be wrong, and they are required to pivot and think again.  That’s OK – in fact, such flexibility is hugely valuable.  As Grant reminds us, ‘being open to re-thinking your position doesn’t mean you always have to change your mind.’

Yet some leaders still fear re-thinking – that by slowing things down, the decision-making process will inevitably become mired in tedious academic debates over the uncertainty of things.  The oxygen will be sucked out of innovative ideas and extinguish their spark forever.

My counter is to refer to Daniel Kahneman whose (Nobel Prize-winning) work prompts us all to ask: Do we spend too much of our time listening to people who think fast and shallow, and not enough time paying attention to people who think slow and deep?

And there are always ways to accelerate our re-thinking. There’s no reason why we can’t take a few minutes to think about all the reasons why an idea might be wrong, not just the reasons it might be right.  That brings me to my final piece of advice: Whenever you’re not sure, channel Whitney and ask a range of people you trust: Can you see any gaps in my argument?  Do I need to re-think?

Thank you, and good luck!

There you have it — an argument in favour of mastering the art of re-thinking, with a little help from Whitney Houston.

If you’d like some advice on how to introduce these ideas into your organisation, get in touch using the form below and we’ll be delighted to help you.