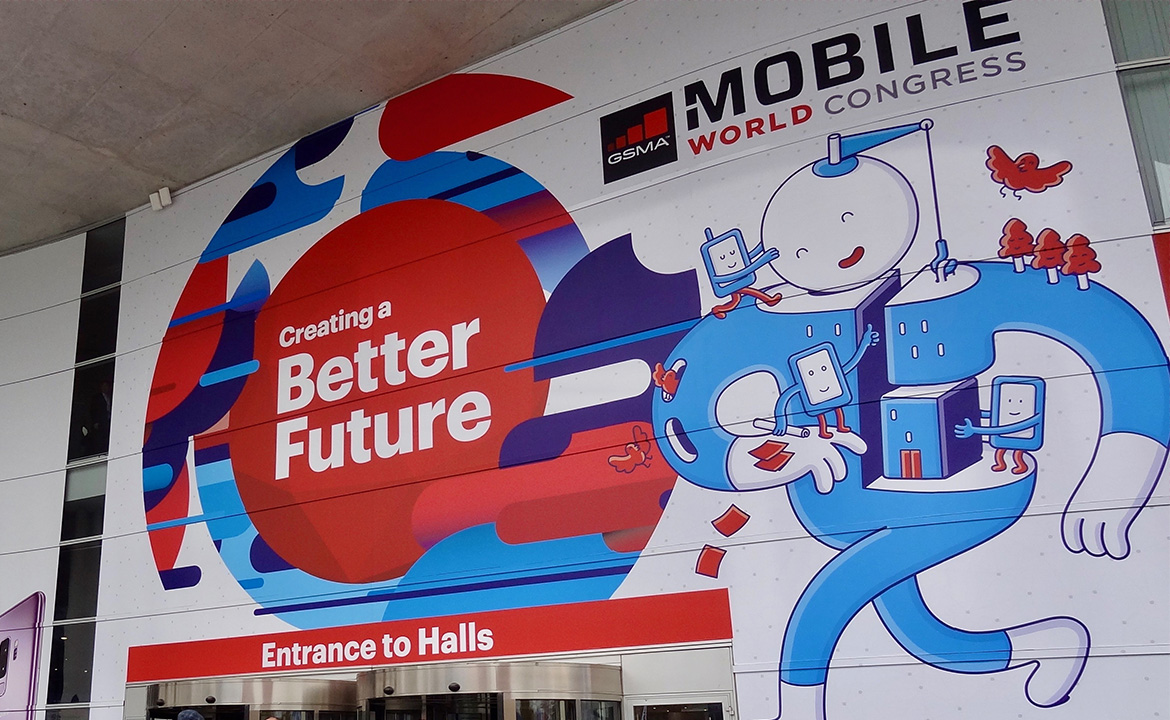 If you want to find out which way the wind is blowing in the world of mobile, there’s nowhere better to go to than Barcelona and the annual jamboree that is Mobile World Congress.

Having recently come back from walking the cavernous halls of the Fira Gran Via and chatting to the mobile industry’s movers and shakers, it seems clear that mobile technology,  and the industry’s growing influence, is only set to continue.

The fact that the show has more than doubled in size in the past five years is a reflection of just how big the mobile industry has become, with many other industries now seeing mobile as the best way to reach both businesses and consumers.

Here’s a roundup of some of the things that struck me during my week in Barcelona.

We’re at something of a strange point with mobile devices, with innovation having really slowed down. The last big leap was 3D facial scanning and recognition on last year’s iPhone X, and we’re at a point where differentiation is incremental and evolutionary. A case in point this year was the Samsung S9. An already good phone got an improved camera (it’s a main selling point for upgraders, so that makes sense). But, tellingly, if there’s any innovation to see at all, it’s coming through novelty (animojis is one example).

The best example of this was the former standard bearer for the early years of the industry, Nokia, which is back (again). You’d struggle to find a better example of how much mobile has disrupted even itself. The Nokia brand represents the first phase of the industry and a period when they would ship half a billion phones a year, but which now exists as a brand operated by new company HMD (they bought the rights back from Microsoft).

HMD did launch several ‘me too’ Android devices, but in a bid to stand out it’s using reinventions of classic phones such as the Nokia 3310 (and this year the Matrix phone or 8810). While quaint, it’s hard to see beyond the nostalgia trip. That said, if Nokia can gain mindshare again through these phones it’s an opportunity to migrate customers to Nokia smartphones. It’s not a bad strategy and probably better than most companies’ efforts to standout in a sea of comparable Android based smartphones. You have to credit Nokia for trying something different.

F1 had one of the most surprising presences. Aside from a stunning stand (hey, it helps when you have a Ferrari), F1 and sports featured heavily at the show, and there was even a keynote appearances from none other than Fernando Alonso! It’s a measure of how mobile is a ‘vehicle’ now for many new industries. It was at MWC that F1 decided to show its intent to become a digital business, showcasing its eSports series and 360 degree cameras on cars next season alongside an OTT (Over the Top) subscription service. After many years of alliances with Pay TV broadcasters, F1 is aiming straight at fans with its own product. They can do this thanks to the scale, distribution and technology of mobile platforms that make this a viable alternative to the broadcast/Pay TV model.

Going all in, F1 will be placing full 360 degree VR cameras on cars, allowing fans to literally get into the driving seat via an F1 app and a low-cost VR headset such as the ones you can now pick up in all good gift shops for £10. It might well be an unexpected killer app for both hardcore and casual sports fans, which could see it finally make a breakthrough to the mainstream where previously only gamers have dared go. With the English Premier League yet to sell the final tranche of rights to cash-strapped broadcasters, you imagine they must be considering their options (or at least watching intently F1 over the coming season).

Currently, the F1 technology previewed in the demoed app is likely to be available post race, not live. Part of this is down to the mobile networks’ bandwidth and latency issues. Improvements loom large on the horizon though, with one of the big themes of the show being 5G. Mobile chipset supplier Qualcomm showed the first working 5G modem for mobile, and the spectrum auctions are beginning – despite concerns being voiced over the business cases to justify the expense of the necessary investment.

As I mentioned, MWC has doubled (like the industry) in the past five years and dwarfs most industries already. Whilst it’s hard to see how it gets any bigger, the signs are there that it will. This year, the show floor was full of new industries that are being enabled by the advancements in mobile technologies. Car manufacturers and related industries were also there in numbers.

On the theme of cars, BMW was heavily pushing its electric range, BMW i, and it was possible to reserve rides in their latest Level 2 autonomous Co-Pilot cars. Perhaps tellingly though, with the rain in Barcelona, these were cancelled. After great strides in recent years, it seems that perfecting autonomous cars to the point where they can be trusted in urban environments is proving more and more difficult. Another big theme, related to cars and transport, was cities. There was a lot of talk of ‘smart cities’ which, when I asked one telco what they felt it meant, was loosely described to me as, ‘Firstly connecting everything with IoT & then using that to make Cities smarter’. Hmmm.

While there were some interesting examples cited, such as the ability to connect buildings with sensors to provide early warnings of construction defects, or traffic management that could be integrated with pollution sensors, it seemed like a term so all-encompassing as to be meaningless. This vision does seem to depend on mayors of cities taking it upon themselves to have their cities made smart for some as-yet undefined benefits (no doubt after an inspirational visit to MWC). An alternative,  which seems more likely, is new startups using mobile to overlay new smarts on top of existing city infrastructure. As an example, while many were looking at autonomous cars, it’s the electric bike-sharing revolution coming from the likes of Mobike and Ofu in China and Europe, and JUMP Bike in the US, which are on the verge of ushering in the biggest changes to cities since the introduction of electrified underground railways.

Fast forward 12 months? Samsung S10 (with a notch), a new/old Nokia, 5G is coming soon (again), and smart cities with a much bigger emphasis on transport and sub-car vehicles such as electric bikes.

We’re hosting a MWC round-up session with a panel of experts organised by Heroes of Mobile at Equal Experts on 21st March. Find out more.