The concept of ‘Flow’ is both simple and deep, and the concept manifests itself in fields as diverse as Psychology, Engineering and Astrophysics. But how can we ‘see’ Flow in Agile Product Delivery?

When applied to Agile Product Delivery, Flow is revealed by the sharing of data, information and knowledge to achieve a common understanding.

One common method to achieve this is Kanban (a Japanese word for “visual signal” or “card”), which leverages the benefits of visual management. It exploits research that suggests the brain prefers a visual display over text:

It represents three principles that avoid emotional resistance to change:

We adopted Kanban at scale with a recent client, working on an energy trading desktop application. The project was large and complex, the team was similarly large (18 talented individuals), and the whiteboard was large too.

Over the first three months of adoption, we visualised and managed three separate Flows, in response to prioritisation changes. The emergence of each separate Flow was gradual, and each one really helped the team to gain clarity around the new context.

I hope it’ll be useful to anyone interested to set out how each one worked. In the following illustrations, let’s use these colours to illustrate user stories and bugs:

After transitioning to Kanban, we first managed the tail end of a Product hardening period that had already lasted a few months. The Flow of work consisted of client support, feature improvements and technical debt tasks. Every day, the Product Owner tagged work items with numbers 1-4 for the team to pull in the correct order:

Stakeholders standing in front of the large whiteboard could rapidly gauge status and gather the overall context. Before this, there was no visibility of business value delivered per work stream, nor weight distribution across the different work streams. Further digital visualisation (in the form of pie charts and Cumulative Flow Diagrams) helped to efficiently manage the closure of this Product hardening period.

After the Product hardening period, our new focus was to expedite the completion of a large feature that had been in development for a few months. To signal the urgency, we made some changes to our Kanban board:

The effect was profound. After two days, everyone understood the context of the new Flow: unless there’s a dire need to work on something else, we need to swarm to get this feature out the door ASAP. 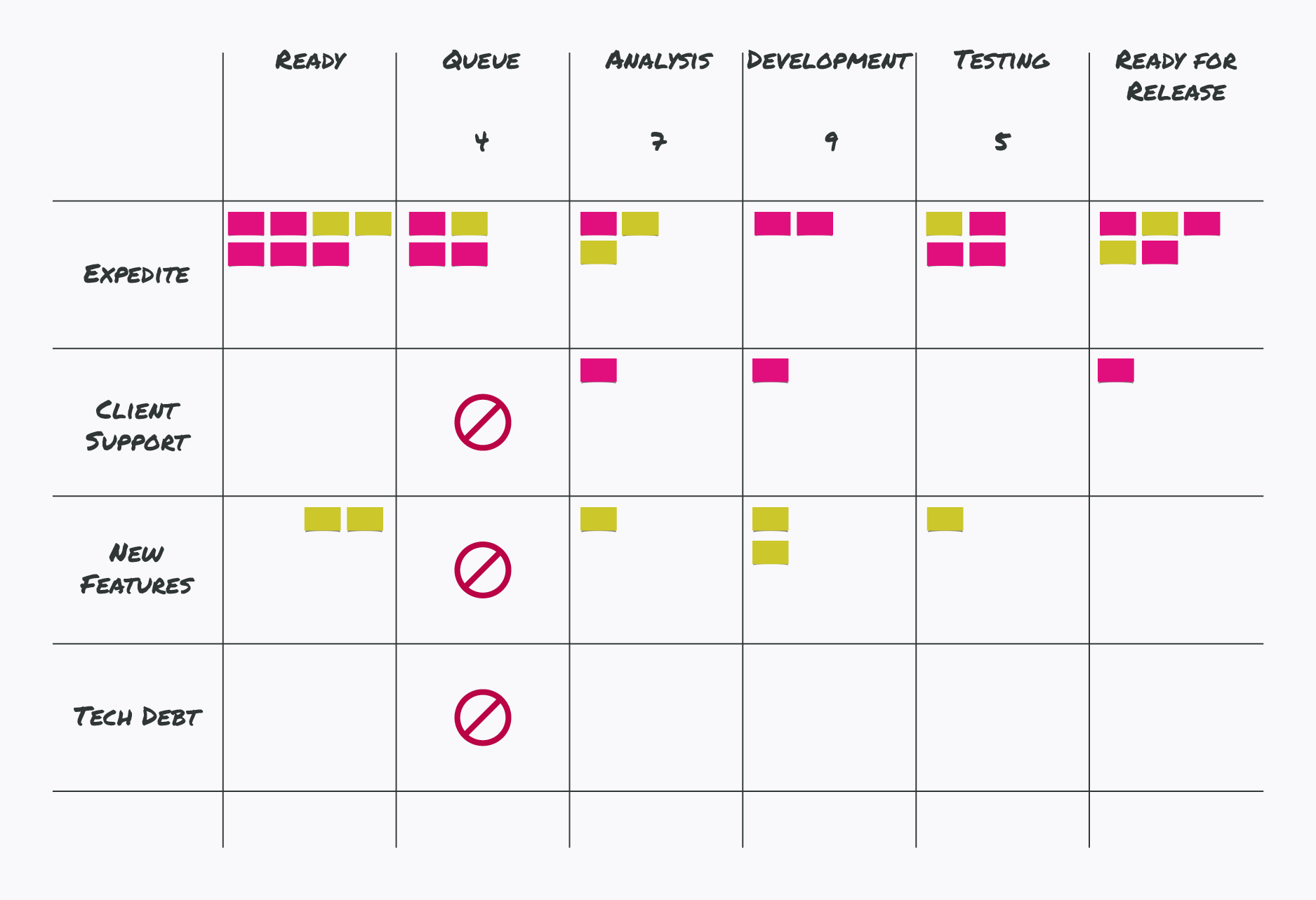 Two weeks later, we released the feature to production – on time – to be showcased at a major European conference. Time for a celebration (and an opportunity to open the tap once again, for new work items!).

In preparation for quarterly feature development, we reconfigured the team into separate squads, based on product domain knowledge and skills. It was expected that the majority of the work would flow through one swim lane – ‘new features’: 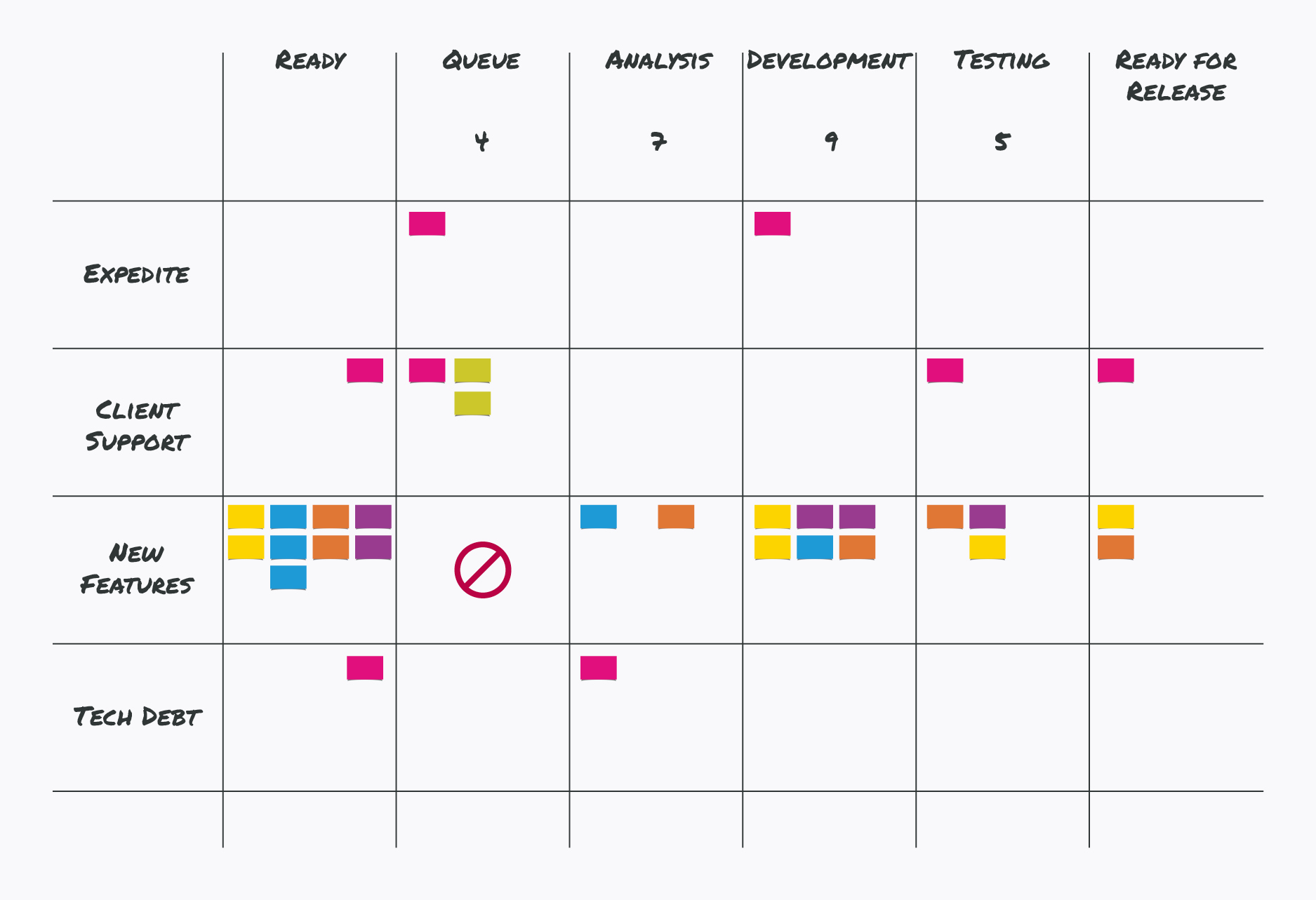 Early on, we identified that the queue limit column (WIP = 4) should not be a constraint for the ‘new features’ swim lane. Squads needed the flexibility to pull in work items previously prioritised by the Product Owner in the ‘’READY’ column. After much discussion, the consensus was that the Product Owner would use the queue limit column only for non-new feature swim lanes.

We also improved visualisation, by introducing new colour coded physical cards for each squad. This was critical to add clarity in two ways:

Within the same Quarter, the whiteboard configuration evolved further to assigning a swim lane per squad.

We learned from each of the Flows demonstrated above. Flow 1 (Product hardening phase) had the biggest visual impact, and the largest whiteboard distribution. It helped to efficiently convey context of business value.

Flow 2 (expedite feature completion) most clearly demonstrated the concept of Flow. By literally forcing Flow through a single swim lane we focused our effort and made a hard deadline.

Finally, Flow 3 (delivery of multiple quarterly features) showcased just how visually adaptable Kanban is – a key strength. The team was able to reconfigure the whiteboard with a swim lane per squad without impacting average cycle time.

If you too are convinced that Flow is king, I’d love to see any other Flow themes you have experienced on your boards. You can find me @elastictribe on Twitter, or the network as a whole @EqualExperts.