We – Steve Smith and Ali Asad Lotia – are the Heads of Operability at Equal Experts (EE). We’d like to set out EE’s position on Site Reliability Engineering (SRE).

We’ll recommend the bits you should try in your organisation, mention some bits you (probably) shouldn’t try, and explain how SRE is linked to operability.

If you’re in a rush, the EE position on SRE is:

And regardless of SRE, do try putting your delivery teams on call. This is better known as You Build It You Run It.

In 2004, Ben Treynors Sloss started an initiative within Google to improve the reliability of their distributed services. He advocated for reliability as a software feature, with developers automating tasks traditionally owned by operations teams. The initiative was called SRE, and it’s become widely known in recent years.

In Site Reliability Engineering by Betsey Byers et al, the authors set the scene for SRE by answering “why can’t I have 100% reliability?:”

In The Site Reliability Workbook by Betsey Byers et al, Andrew Clay Shafer talks about reliability at scale, and says, ‘I know DevOps when I see it and I see SRE at Google, in theory and practice, as one of the most advanced implementations’.

The bits of SRE you should try

Based on our experiences, both of us recommend you try these SRE practices:

Don’t try them all at once! Run some small experiments, collect some feedback, and then adjust your approach. Availability targets are a good starting point, and Site Reliability Engineering lays out an excellent approach.

This is a powerful heuristic you can use to reason about availability targets. Like all heuristics, it’s enough for a short-term approximation that won’t be perfect. Engineering effort will always vary by service complexity.

For example, a delivery team owns a service with synchronous dependency calls. They spend three days on operational features, to harden the service until it reaches 99.0% availability. For the exact same team and exact same service, it would take up to 30 days to reach 99.9%, maybe by adding blue-green deployments and caching dependency calls. It would take 300 days for 99.99%, perhaps by reengineering dependency calls to be asynchronous and replacing the service runtime. The product manager would have to balance availability needs against three days, one month, or nine months of effort.

The bits of SRE you shouldn’t try

EE consultants strive to advise organisations on what not to try, as well as what to try. We both believe you should (probably) skip these SRE practices:

These aren’t bad ideas. They’re expensive ideas. They require cultural and technology changes that take at least an order of magnitude longer than other SRE practices. We’d only consider an SRE on-call team over You Build It You Run It if an organisation had services with an ultra high downtime cost, relative to its other services. Then a 99.99% availability target and up to 100x more engineering time might be justifiable.

There’s a common misconception you can rebadge an existing operations team as an SRE on-call team, or an SRE advocacy team. Both of us have repeatedly advised organisations against this. Aside from the expensive cultural and technology challenges linked to both types of SRE team, adopting SRE principles requires software engineering skills in infrastructure and service management. That expertise is usually absent in operations teams.

For a given service, we both believe these are valid production support options: 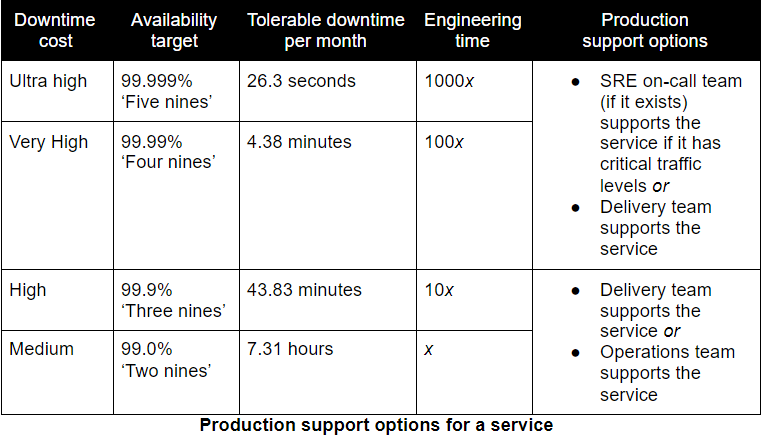 It’s all about operability

In 2017, our colleague Dan Mitchell talked about operability as the value-add inside DevOps. Dan described operability as ‘the operational requirements we deliver to ensure our software runs in production as desired”. He mentioned techniques such as automated infrastructure, telemetry, deployment health, on-call delivery teams, and post-incident reviews.

Operability is a key enabler of Continuous Delivery. Continuous Delivery is about improving your time to market. A super-fast deployment pipeline won’t be much help if your production services can’t be operated safely and reliably. EE helps organisations to build operability into services, to increase their availability and their ability to cope with failures.

Operability is the value-add inside SRE.

Four Golden Signals, SLIs, and SLOs are a great way to improve your ability to cope with failures. Per-service dashboards tied to well-understood characteristics, and per-service alerts tied to availability targets can provide actionable, timely data on abnormal operating conditions.

For example, Steve recently worked with an enterprise organisation to introduce availability targets, SLO alerts, and You Build It You Run It to their 30 delivery teams and £2B revenue website. In the first year, this was 14x cheaper on support costs, 3x faster on incident response time, and 4x more effective on revenue protection. SRE was hardly mentioned.

If your organisation has a few delivery teams, we’d expect them to adopt operability practices for themselves. If you have delivery teams at scale, you might consider an SRE advocacy team, as Jennifer Strejevitch describes in how to be effective as a small SRE practice. We’ve done something similar with Digital Platform Enablement teams, as described in our Digital Platform playbook.

SRE is a real pick and mix. We believe some of its practices are really good. You should try them, to progress towards Continuous Delivery and operability. We also see some ideas that you (probably) shouldn’t try.

The EE position on SRE is:

And with or without SRE terminology:

If you’d like some advice on SRE, Continuous Delivery, or operability, get in touch using the form below and we’ll be delighted to help you.