Traditional roadmaps can become so granular that they turn into long to-do lists, or drift so far into vagueness that they mean different things to different people. Teams can’t see how their work relates to business priorities, and become demoralised and demotivated.  The Roadmap Radar addresses these anti-patterns by ensuring that all efforts are clearly aligned to your strategic goals and objectives.

What is the Roadmap Radar?

“Sometimes I feel a lot of things but I keep it in. I’m sure we all have this built-in radar of what we predict and when it happens, we feel ‘I knew it’”. – Muhammad Ali 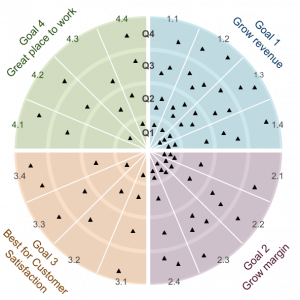 The Roadmap Radar is a tool unique to Equal Experts. We are not averse to reusing the tools already available, but in this instance we found the market lacking. Planning tools rarely cater well for agility and change, and do a poor job of connecting delivery teams with the organisational goals – the essential “why” of their work. It is for this reason that we developed the Radar to align the goals and objectives captured during an OKR session (as described previously in Part 2), and bridge the gap between the objectives and the tactical ‘Bets’ placed by the organisation in pursuit of business value (in Part 4).

In essence, the model provides an intuitive visualisation of the organisation’s priorities.  By plotting initiatives against specific objectives within agreed time horizons, the Radar also confirms clusters and/or gaps in effort. In this way, activities are directly aligned to the organisation’s strategic goals, thereby providing teams with a greater sense of purpose and meaning.  Any misaligned activities are placed into the backlog, ensuring resources are effectively allocated.

A common symptom of granular roadmaps is a tendency towards a ‘Project’ culture, with a count of outputs (items ticked off a list of tasks) distracting from the realisation of real business value.  And you know when the Roadmap has become too vague when you notice people – with all the right intentions – doing their best to interpret an obscure and ever-changing plan. The most obvious example of this is when teams build things “just in case”, that either overlap with other efforts, or are in themselves pointless.

The Roadmap Radar ensures that everyone purposefully works on proving the business value of ideas that align to the strategy of the organisation. It removes dependencies, simplifies decision making, and empowers teams.

“I train myself mentally with visualization.” – Camille Duvall

We chose the visual metaphor of a Radar for a few reasons.  One is that a Radar is by nature dynamic; by using it, we challenge the idea that Roadmaps, once drawn up, are static and unchanging.  Another is that the ‘Bets’ appear on the Radar as blips, which can move towards the centre (therefore indicating that they are more urgent and important), or move out to later quarters, according to an organisation’s evolving understanding of the challenges and opportunities.

The “single big picture” nature of the model allows anyone to see imbalances in the plan. Too many Bets against a single objective in a single quarter will most likely overextend the teams, and lead to diminished outcomes; too few plotted against a Goal typically indicates that the portfolio isn’t quite as balanced as the organisation may claim. It is always clear where further work is required.

The radar format also limits space in the current quarter, whilst providing more space in the outer rings. This naturally guides teams to commit to fewer things this quarter, but encourages conjecture in future quarters. As time progresses, and items move inward, discoveries and new information remove that conjecture and the reduced space encourages pruning and prioritisation.

A final advantage is that beyond four quarters, the Radar format becomes unwieldy. This is deliberate and should not be worked around. It is okay to use that space around the edge of the Radar for possible futures, but anything more than that ignores the original point of the Continuous Evolution – the future is unstable and unpredictable.

What outcomes should I expect?

“Tell people there’s an invisible man in the sky who created the universe, and the vast majority will believe you. Tell them the paint is wet, and they have to touch it to be sure.” – George Carlin

Across a variety of engagements in different sectors, the Radar has been instrumental in creating  a balanced portfolio of Bets, that helps organisations decide where to go next, with confidence. It has allowed companies to rapidly reorganise, shedding siloed approaches in favour of multidisciplinary teams, and it has worked within organisations to improve transparency and collaboration.

In a major mobile provider, we created a Radar that helped make a complex portfolio of innovative ideas manageable and focused effort on the first few bets prioritised by business value, speed to market, and level of experience gained.

Working alongside a major professional service provider, we tackled a traditional and static three year transformation programme with multiple critical paths and interdependencies. Using OKRs and the Roadmap Radar we turned it into an agile driver of change designed to deliver real value at least every quarter.

We helped an eCommerce function within a large retail company get to grips with an overwhelming internal demand pipeline. Here, the Roadmap Radar helped not only with alignment of activities, but also with prioritisation, removal of duplicated effort, and stakeholder engagement.

In all these cases, use of the Radar significantly reduced risk, improved agility and improved team morale and motivation.

How is a Roadmap Radar structured?

“Order is the shape upon which beauty depends.” – Pearl S. Buck

Drawing on the language of OKRs, the Goals create the main coloured regions of the Radar, and reflect the long-lived ‘North Stars’ of the organisation, capturing its purpose and values. Radars tend to comprise 4-5 Goals, and this part of the model changes infrequently, unless the organisation decides to radically diversify.

Objectives are the “pizza slices” of the Roadmap Radar, and are divided into concentric rings covering quarterly time horizons; they represent strategic priorities, and are always aligned to the Goals. Objectives  are aspirational, and outcome-based, e.g. “Acquire new customers” or “Be number one for customer satisfaction”and each objective is aligned to one, and only one goal. In working to achieve an objective, a team must prioritise the aligned goal in all its decisions, but is not allowed to undermine any of the other goals. This is another advantage of the radar format – it allows everyone to see the whole picture at once, and thus avoid any such conflict.

Whilst the number of Objectives per Goal varies, our advice is that one is too few and five is too many. If you only have one, and you fail against that Objective, you automatically fail against the Goal, which is a big risk, and this entire process is about maximising business value whilst minimising risk. Conversely, having five or more will dilute efforts across the 90 day cycle.

‘Bets’ are shown on the Radar as triangles, with each one representing a time-bound experiment, designed to explore the impacts of an intervention. Each Bet includes carefully controlled variables, and progress is measured by the Key Results captured during the OKR process.  The optimal approach is one bet per squad per 90 day cycle.

The most important thing to remember when using the Roadmap Radar is that it isn’t a plan; in other words, it is not laid out in stone to be followed blindly. Everything about the Radar is volatile, within its own cadence. Goals are relatively stable, but even these may change after a year or two. Objectives should at least evolve every quarter as Bets are won or lost, even if they are not completely replaced by new ones. And the Bets that populate the Radar should be the most volatile – we’ll cover Bets in Part 4.

It is not enough to simply use the Radar without adapting your organisation structure to it; this would defeat the original object of the exercise – to become a flexible company able to continuously evolve. But the Radar does make it easier to reorganise, as you already have the structure around which to do that.

Transformation requires you to create self-contained multi-disciplinary teams dedicated to the delivery of specific Objectives. One team per Objective is ideal, but it is okay to have a team pursuing two or three neighbouring objectives at once, provided these objectives all align to the same goal. Each team should contain all of the individuals and skills necessary to achieve the objective, and so as the Bets evolve, it might be necessary to tweak the team make-up as you go.

The other thing that needs to change, if you are to get the full benefit of Continuous Evolution, is your performance and reward approach. If collaboration, empowerment and motivation are to be maximised, performance should be measured at the Objective (and therefore the team) level, and reward should be at least at this level and no lower. Individual performance management and reward, ubiquitous though it is, is not the only way to run a business, and it is not part of the Continuous Evolution approach.

In the fourth and final part of this series, we explain in more detail the concept of “Bets” and introduce the Bet Canvas – a tool for shaping activities in a way that gets you to doing fast, whilst reducing risk and resolving assumptions.

Part 1 – An agile strategy for an unpredictable world
Part 2 – Shaping the vision
Part 3 – The Roadmap Radar – When is a plan not a plan? – (you’re here!)
Part 4 – The Bet Canvas – Nothing ventured, nothing gained