I’ve worked with lots of teams over the years where team members haven’t been colocated on the client site.  In the early days, it started off working with the offshore team, where power and control inevitably lay with the home team.

More recently, with the rise of more effective home-working technologies and remote-first working practices, there has been a positive shift away from the mentality of offshore and home teams towards remote-first teams.

There is no single way to describe the difference between a remote and an offshore or nearshore team; the line is blurred.  Just because someone works from home on a Friday doesn’t make a remote-first team, having some team members working from the Maldives doesn’t make an offshore team.  So, here are my traits to help you identify and think about moving towards remote-first working. 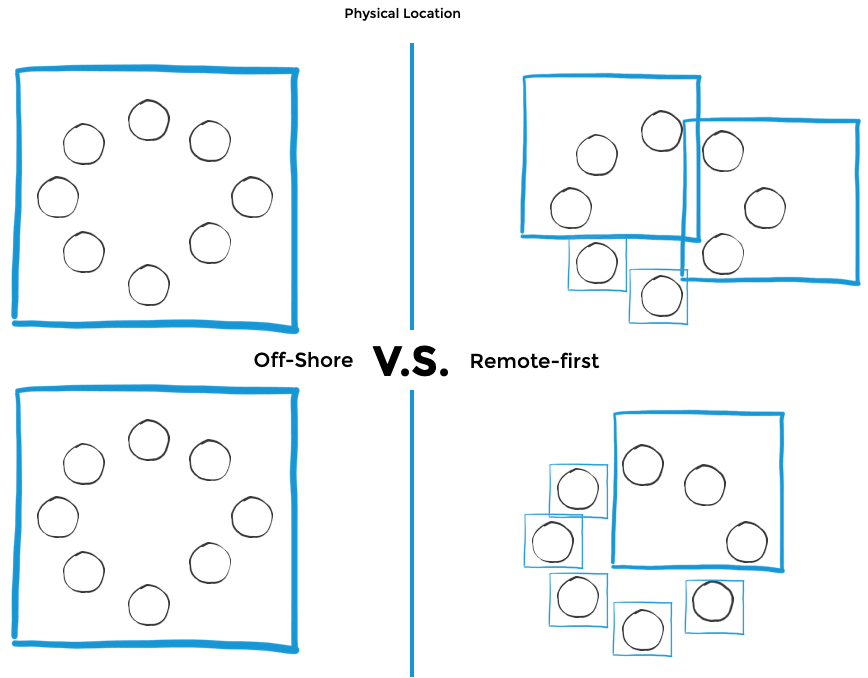 Traditional models are bound to physical locations based around the office(s).  Meeting format is based on the meeting room, often with a big TV setup so everyone can be seen, but no one can actually discuss, engage nor often hear.  Worse still, it’s often just the leads in each location talking, “we discuss, the team listens”. Silos are naturally created around the collocated groups, which can make it very hard for common ground between cross-group team members to be achieved.

The remote-first team is virtually colocated, rather than physically colocated.  While physical locations still exist, the default is to meet in the virtual world (e.g., Zoom, Slack etc.) to ensure everyone has the same access and involvement.  If one person’s remote, everyone’s remote.

Remote Trait: It doesn’t matter how many physical locations exist.  New locations are seamlessly added to the team. 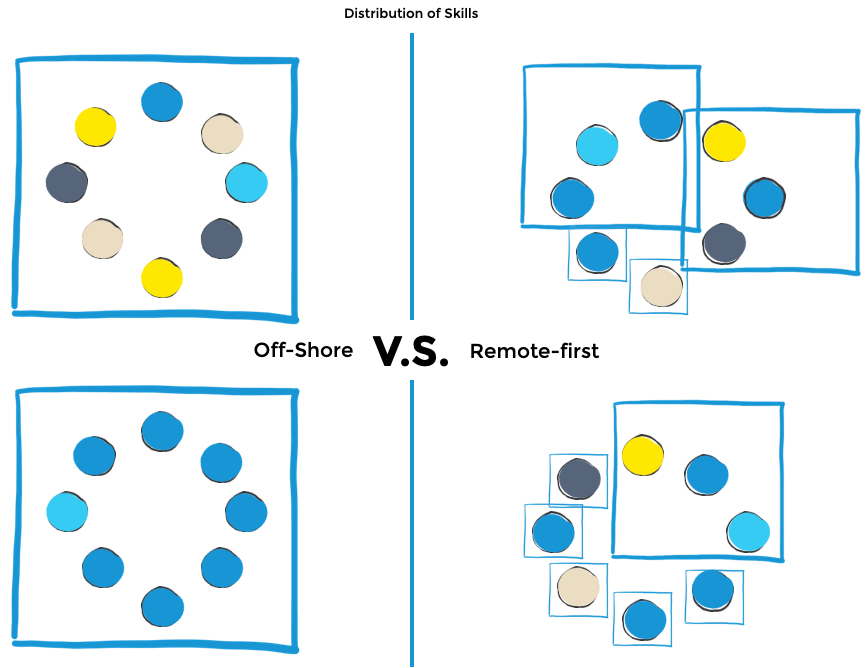 Traditional offshore models provided a monoculture of skills for the offshore team.  For a development team, often the offshore team would have Developers (Devs) and Quality Assurances (QA) while roles such as Business Analyst (BA), Delivery lead (DL), User Experience (UX), and DevOps would only reside locally along with any local Devs and QAs.  In contrast, a remote-first team has the skills where they are needed to ensure the right flow of work, in effect promoting a cross-functional team culture by enabling the teams to seamlessly interchange themselves when and where needed.  This often results in BAs, DLs, and DevOps residing in the physically remote offshore group, so a whole team is aligned on timezone(s) rather than location(s). There may be some roles that are dependent on physical location (or time zone), and some aspects of user experience testing could be one such example.  But on the whole, as long as the skills exist, roles can be distributed. 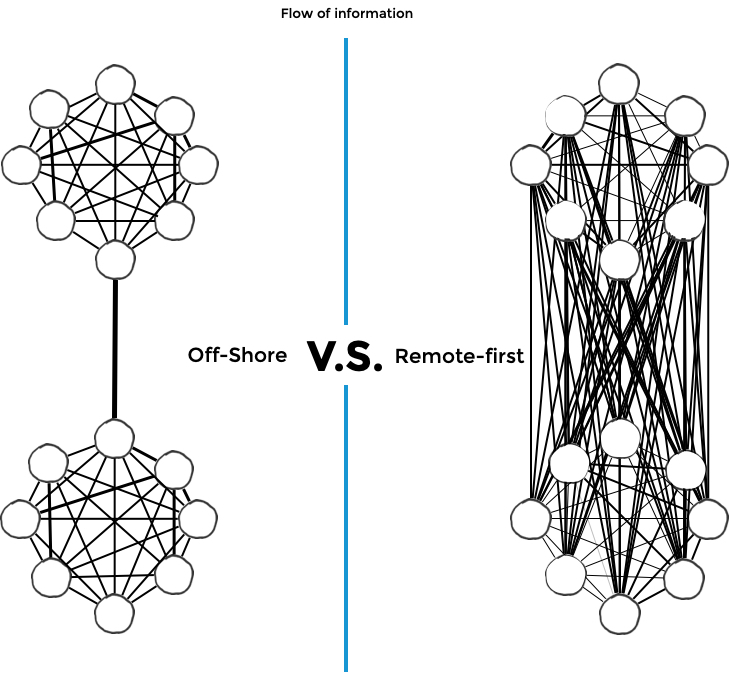 We want to shift the communication from travelling through the on and offshore team leads, who then update the rest of the group, to multi-channel communication that provides the team real-time accurate context to perform their tasks.  Full team, face-to-face meetings can still happen over tools like Zoom; with your video on, everyone can be seen.  “Watercooler” moments can still happen with teammates over Slack, or when you are shooting the breeze before the meeting starts.  Basically, people and information are (generally) accessible to the whole team and not channelled through individuals.

Team members have a definite responsibility to conduct their communications effectively and efficiently, even more so for remote-first teams.  In effect, each team member is responsible for completing the feedback loops they start.  For example, conversations that happen in private chats and affect other team members or their work need to be communicated back to them.  We won’t always get it right, but being mindful of our responsibility goes a long way in making communication in the team efficient.

Remote Trait: Information flows freely between all team members regardless of physical location (or continent) 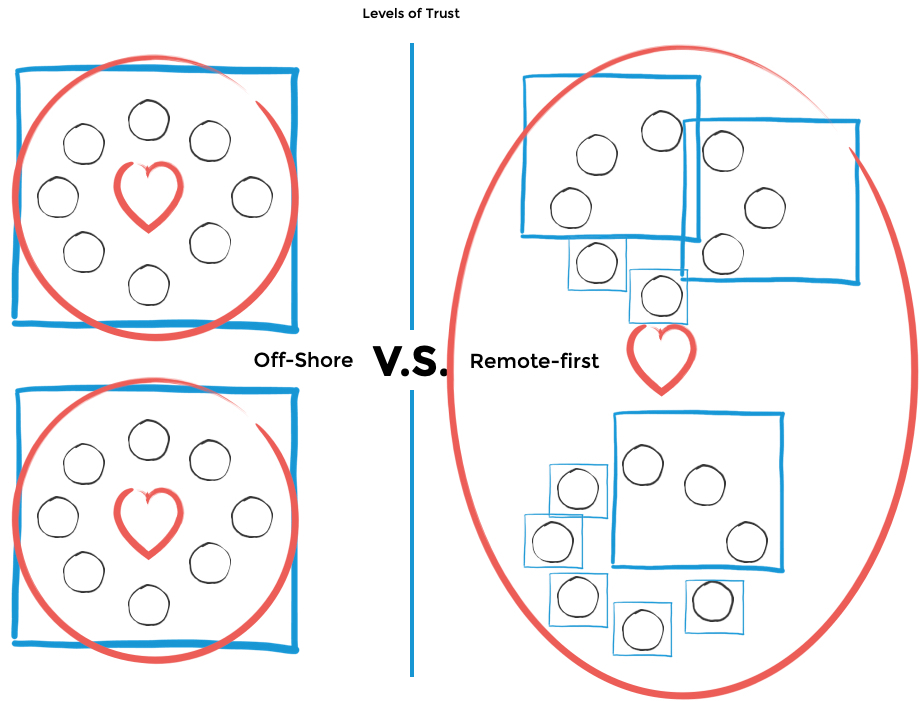 Models bound to physical locations often create siloed ‘circles of trust.’    Within a location, a high level of trust exists, but because there are limited interactions across teams, inter-team trust can be low.  As you increase the distance separating people, you decrease the amount of spontaneous, informal contact amongst the team, which reduces team interactions.

Trust is built over time through interaction; private moments between team members are required, and spaces need to be defined so that teammates feel comfortable speaking or contributing.  Remote-first teams create an environment that allows for quality interaction.  They reduce the friction required for connection, create private spaces so people can hold frank and open conversations and ensure that channels are clearly signposted so people can talk about relevant topics in the relevant place.  These range from specific technical subjects to a place just for some water cooler chat, all of which help promote connections between co-workers.

If basic levels of trust are not present, there are fewer interactions and, therefore, even lower levels of trust.  With the right levels of communication, you learn about your teammates’ personalities, assess their values (and how they fit with yours) and evaluate their capabilities and expertise.

Open, prompt and continual interactions allow you to gather evidence about other members’ credibility and trustworthiness.   Remote-first teams take the extra effort and time to talk via video and keep constant communication via messaging.  If you’ve gone through the whole day and have only spoken to your cat, then maybe you need to communicate with your team a bit more.

Remote Trait: Communication channels are designed to foster trust between individuals and teams.

Distribution of decision making is highly dependent on the factors described above being in place.  If you don’t have a flow of information, people can’t make informed decisions; if you are at a physical location rather than virtual, you will make decisions based on your silo; if you don’t have distributed skills, decision-making slows down because of time zones and availability.  If you don’t have high levels of trust, you will discount important information when making a decision  Empowering those who are closest to the problem and have been given the right information makes for higher quality and faster decision making and allows the team to shift from “do what I say” to “go solve this problem”.

Remote Trait: Decisions are made by the person with the best context and who is closest to the problem

This is the easiest thing to lose over the wire and is equally problematic with offshore and remote-first teams but can be approached differently in a remote-first minded organisation.  For example, if the business owner is stressed because of important delivery milestones or feature deliveries, understanding and truly empathising is still easier when physically collocated.  When and where possible, jump on the bike/car/train/plane so you can experience and really understand the situation and reset context.  In many cases and especially when adopting a remote-first approach, you might not have the means to travel and come together.  The emotional connection and experience can still be achieved without being physically in the same location and it all comes down to designing your communications well.  Ensuring that people can grasp the gravity of a situation in terms they understand and contextualise is key to providing that emotional connection to a situation for remote-first teams.

There are many organisations in which this will be difficult to execute.  Things to watch out for include:

To fully embrace the remote-first mindset in your organisation, what matters are traits and working practices used rather than where people are physically located.  Address the traits above and start working remotely.

More on remote working can be found at https://remote-working.playbook.ee