I’m sure, at some point in our careers, we’ve all embarked on a project with a clear outcome in mind, but found that somewhere along the way we’ve either lost sight of the goal, or worse still, delivered that goal only to find out things didn’t work out the way we’d planned. Reshaping activities as Bets keeps the mind focused on that uncertainty and breaks things down into meaningful wins.

You won’t know until you try

“Luck is what happens when preparation meets opportunity.” – Seneca

In part 1 of this series, we introduced our Continuous Evolution approach, in part 2 we explained how we use a purified form of OKRs to turn your vision into concrete objectives, and in part 3 we described how to condense all of this into a Roadmap Radar. You may already have read these preceding parts, and you may even have experimented with using what you’ve learned so far to shape a portfolio of work around your organisation’s strategic goals.

However, before you proceed any further, there’s one more step and it’s probably the most important of all if you want to bring true agility to your ways of working. We call it the Bet Canvas, and it’s an easy-to-use tool that helps structure your delivery activities in a way that encourages experimentation, innovation and pragmatism. Placing bets allows your organisation to test which interventions will improve business outcomes, at minimum risk.

The word “bet” is intentional language that confronts how much we are willing to stake on the stated outcome, in terms of people, time and investment.  It relies on the effective design of a structured experiment, that creates feedback loops, validates the business value of an idea, and reports on progress towards specific, leading metrics.

What makes a good bet?

“If you must play, decide upon three things at the start: the rules of the game, the stakes, and the quitting time.” – Chinese Proverb

To work well, each bet must be:

A bet is used to test one hypothesis for how an objective might be achieved, and so it is pursued by a small, autonomous, cross-functional team that contains all the skills required to prove out any assumptions. Each experiment builds the organisation’s capability, enabling the pursuit of future bets with a higher degree of confidence.

To explain the construction of a bet in more detail, let’s consider the following example: 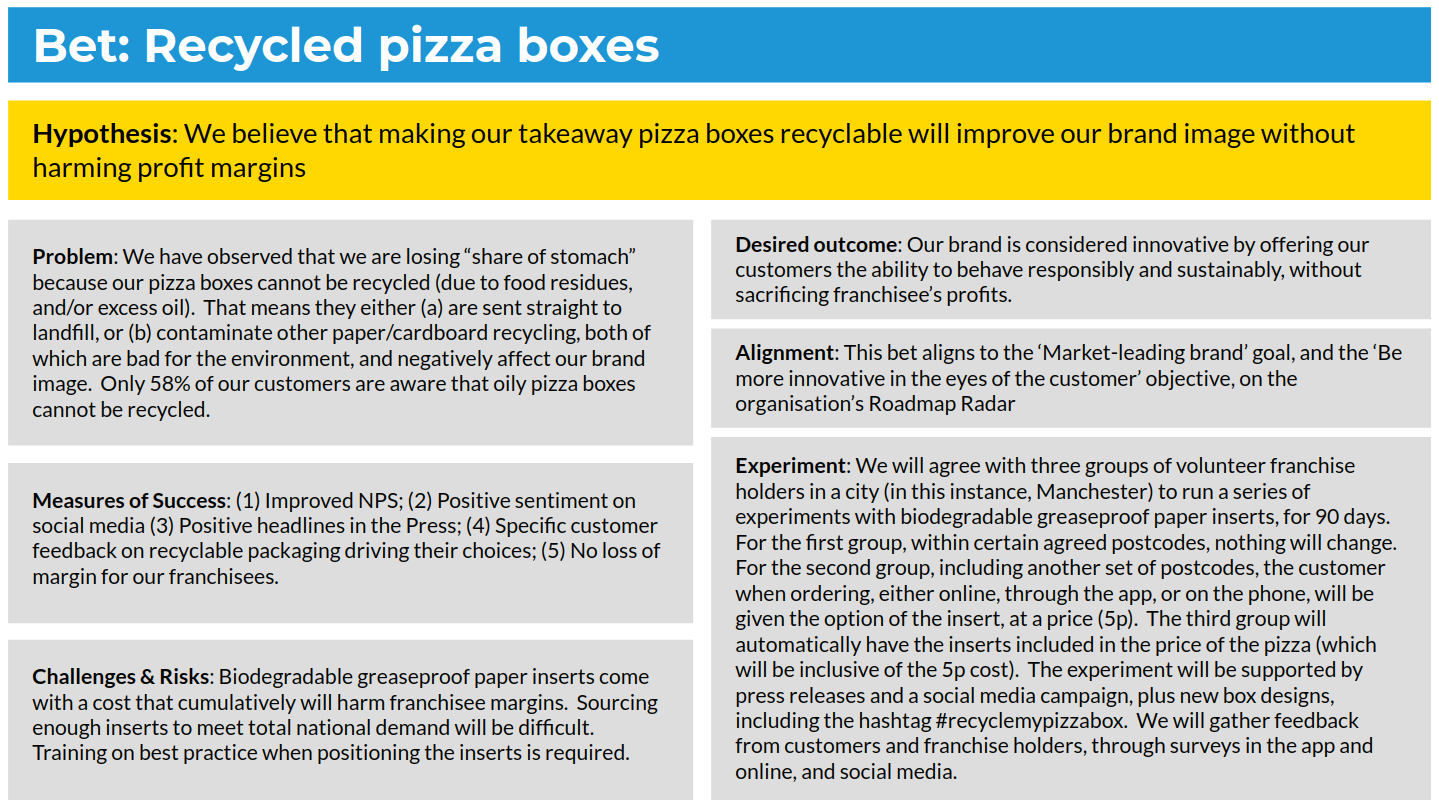 The first section is a simple headline, capturing the essence of the bet.  Keep it short and ensure the statement feels familiar, by using the language of your organisation. Avoid specific solutions at this stage – this is supposed to be both general and memorable

Each part of the hypothesis statement is a choice,and should be carefully considered and debated by the team. Be specific – each hypothesis refers to a single potential solution to a problem. Never include “and” statements as this indicates you’re attempting to pursue two bets at the same time.

At this point, the team should outline, as briefly as possible, the problem they’re trying to solve.  Details, such as existing metrics, should be included, to indicate the size of the problem. If the problem cannot be concisely and precisely described, it means that you should either spend time developing a shared understanding, or place an alternative bet.

Any problem that is too large to claim, and/or is beyond your organisation’s influence should be considered a ‘fact of life’, and removed from the bet. For example, in this case, the pizza company cannot control the limitations of global recycling protocols.

Be ruthless – each problem must be substantial enough to justify committing time and resources otherwise it should be de-prioritised, and do not proceed beyond this point until everyone agrees on the problem being solved and the potential value therein.

Using the measures articulated in your hypothesis, this list itemises how you will measure progress towards the goal & objective to which your Bet is aligned. Use measures that are easy to capture, and be creative – the right measure may not exist now, but can be created. Don’t try and boil the ocean – measuring the number of boxes sent to landfill would be a potential measure, but it is impossible to accurately capture.

In this example, the organisation is measuring success in two main ways: (1) improvements to brand image, and (2) maintenance of margin.  Whilst margin is easy to measure, the brand image is more challenging, but might be measured using mechanisms such as Net Promoter Score, sentiment on social media, headlines in the Press, and customer feedback. Recycled pizza boxes would be an “announceable”, and result in such events as the CEO being invited onto Radio 4’s Today programme, whilst customer feedback might come in the form of answers to the question: “Why did you choose us today?”

This is an opportunity for the team to identify any difficulties they might face when pursuing the Bet, therefore prompting the right conversations, at the right time, about how to mitigate risk and/or drive out assumptions.

In this example, the organisation needs to confirm the cost and supply implications of inserting biodegradable greaseproof paper into their pizza boxes.  Thinking creatively about challenges and risks allows the team to anticipate problems that can be mitigated now – in this case, training requirements that could, depending on results, be rolled out nationally.

If risks cannot be removed or substantially mitigated by the core team, it may mean you need to invite more/different people. If the risks are too large and/or numerous, this means you need to pivot or abandon the bet. Don’t panic – all bets worth pursuing have challenges & risks.

This stage involves a brief description of the optimal future state. It is the “why of the Bet Canvas, and its purpose is to help concentrate the mind. If the desired outcome can’t be easily expressed, or seems underwhelming, that is a signal that the team should pursue an alternative bet.

In this example, the bet is that the desired outcome (improved brand status) is made possible through making an intervention (in this case, including biodegradable greaseproof inserts) that changes behaviour (allowing customers to recycle their pizza boxes) with no adverse financial effects (such as reduced profit margins).

Outcomes should be ambitious, such that every bet feels like a stretch goal. Always think in terms of ‘interventions’ and ‘changed behaviours’, and avoid vagueness. Measuring progress towards the desired outcome should be easy, or at least, uncomplicated to capture.

Each bet must align to an objective which in turn aligns to a goal, as confirmed through the OKR process.  That is to say, the successful pursuit of a bet delivers progress towards the realisation of prioritised business value. A bet should never align to more than one objective and should be checked regularly for relevance, as objectives can change. If the Bet doesn’t clearly align to an objective, it should be rejected and reformulated (or dropped).

The last section is the most demanding, and the most valuable.  Time should be spent designing a robust, repeatable experiment that sensibly controls variables, and produces leading measures of progress that can be captured and reported weekly.

In this example, there are three cohorts – a control group, a group for whom the additional cost is optional, and a last group, who have the price of the insert included in their order by default.  Certain variables are controlled – firstly, the experiment only applies to one city, each group is defined by the boundaries of certain postcodes, and will only run for 90 days. This limits the organisation’s exposure to risk, whilst maximising the number of lessons learned from placing the bet.

When devising an experiment, limit as many variables as possible as this reduces exposure to risk. Ensure that you have rapid feedback loops to help guide progress, and remember that this is not a ‘to do’ list, but a rigorous test of the assumptions that underpin the bet.

“I told her once I wasn’t good at anything. She told me survival is a talent.” – Susanna Kaysen

This concludes our series of posts on our Continuous Evolution framework, and now is a good time to re-emphasise that the approach is iterative. It is not enough to create a roadmap, pursue some bets and then use that to create a long term delivery plan. This framework provides an alternative way of working, rather than a temporary fix to a short term problem. In part 1 we explained the overall cycle as three phases, Shape, Plan and Execute, and to get the most benefit from it, we would recommend that you repeat this cycle quarterly. This may seem challenging – it may even seem overwhelming, but that is the nature of change. It is relentless and inevitable, but it is not, as some would claim, highly variable.

There are not long periods of stability punctuated by sudden periods of change. It only seems like that to organisations that fail to notice the change around them until it becomes so great that it cannot be ignored – and then it is often too late.

We have introduced, what might be, to many of you, a very different approach to managing change and planning for the future, and it is fair to say it only touches on what is a fundamentally wide reaching transformation for most traditionally structured organisations. However, We would encourage you to give it a try; it has worked well for those we’ve introduced it to, and it is based on experience gained in those same large traditional organisations.

Start small, explore, test and learn, and remember the world is not predictable. Success lies in the ability to adapt quickly – we’re here to help if you need us. If nature teaches us anything, it teaches us that to survive and thrive demands Continuous Evolution.

For more information, or to engage our services, you can contact the Equal Experts Strategic Advisory Practice at StrategicAdvisory@equalexperts.com. We’re also on twitter @EqualAdvisory if you want to follow us.

Part 1 – An agile strategy for an unpredictable world
Part 2 – Shaping the vision
Part 3 – The Roadmap Radar – When is a plan not a plan?
Part 4 – The Bet Canvas – Nothing ventured, nothing gained – (you’re here!)