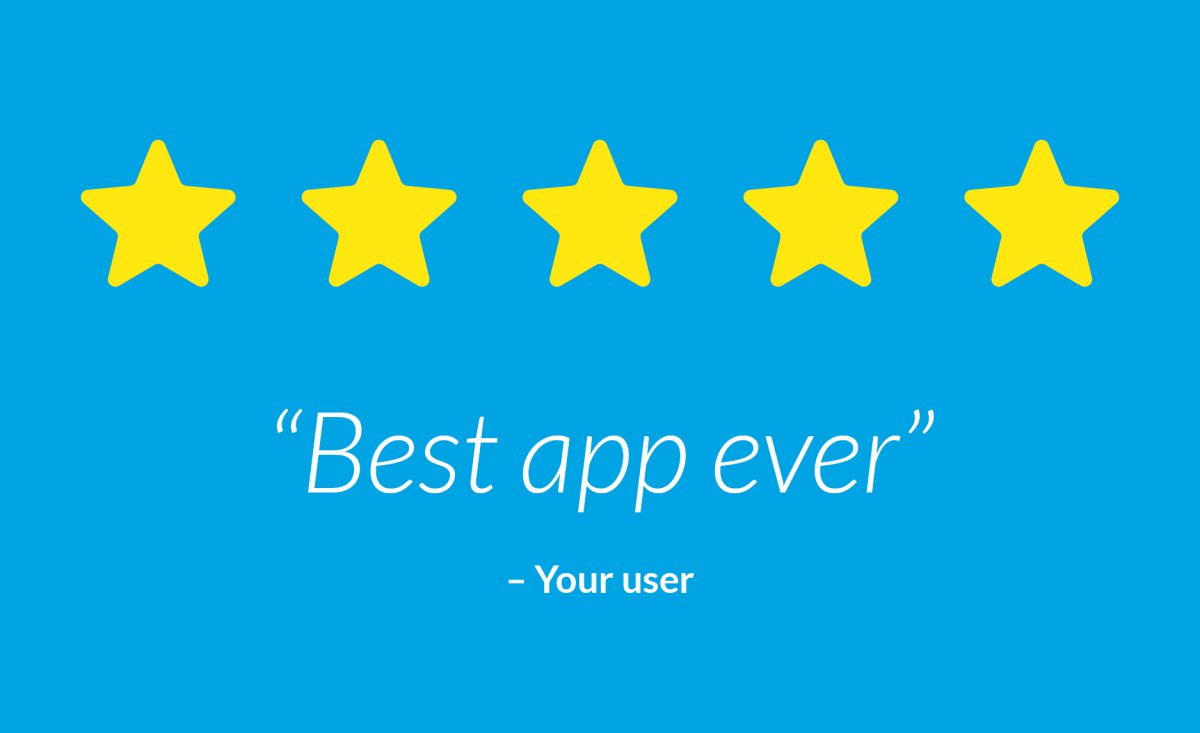 After going live with our new rating engine, we received an additional 1781 new reviews in just one week, with an average of 5 stars. And at the time of writing, we now have over 34k reviews – with the app still rating at 5 stars overall.

As anyone with a smartphone will attest, there’s an ever-increasing abundance of apps competing for users’ attention.

Open up your chosen platform’s storefront and you’ll be confronted with a bewildering array of options, no matter what you’re searching for.

To help customers find the best apps, the platform owners prominently display user ratings within their stores, and this introduces a whole series of extra considerations.

On the surface of it, a 5-star rating system is nice and simple for users, but this apparent simplicity is the shiny lid on a large can of worms. Not only are ratings and comments pretty much all new users have to go on in terms of whether to download your app, but current users may also feel they are they only way to contact you to vent any frustrations.

Such frustrations may be directly related to the app itself, or they may reflect a broader issue – so it pays to remember that the 5 star rating can represent more than it claims to. Nevertheless, the user rating is an important factor in driving new downloads, and is therefore a key element to consider for anyone delivering a native mobile application.

How important are user reviews?

While it’s difficult to quantify exactly how important the user rating is to an app’s success – there are plenty of other variables to consider – it’s undeniably a crucial aspect. One reason for that is the fact that higher-rated apps enjoy more prominence in search results. If existing users love your app, there’s much more chance that others will find it in the first place. And when they do, they’ll be more likely to hit the download button if they see a plentiful supply of stars by your app’s name.

Of course, there’s also the flipside to consider – if your app has a bad rating, potential users may be put off from trying it, while those you do have clearly aren’t happy customers. This puts the reputation of your business at stake; who wants to be seen to be offering people a bad experience, and so publicly at that?

So whether you’re offering an experience that users already love, or looking to raise your star rating, it pays to invest in improving your rating.

The good news is that improving your rating is straightforward in one sense – you should demonstrate that you are listening to your users’ feedback and work to address the issues your customers are having. To do this, you need to prioritise the valuable feedback you are receiving (for free!).

While this all sounds like common sense, acting on reviews may not always be straightforward (or recommended), whether for technical or business reasons. Even where this is not the case, acting on user feedback will require your delivery team to be flexible; the planned development roadmap may well need to change to allow the team to focus on what are more pressing issues (as far as your users are concerned).

People feel good when they are listened to, and when it’s clear there are humans on the other side of an app, considering their needs, they are likely to be more thoughtful and positive in their reviews. While you can’t respond to individual feedback, you can use the release notes that accompany your updates to underline the fact you are listening. Some of the most successful apps use this opportunity to establish and develop a conversational rapport with their users.

Remember, you can’t control everything

As we touched on above, many things affect your app’s rating. Some of those are in your control and some are not; one thing to bear in mind is that people’s reviews will be coloured not just by their immediate experience with your app, but also by their views of the organisation.

Nevertheless, focusing on the things that are in your control can stack things in your favour and lead to an impressive rise in your user rating. For the last three years, we have been actively developing an app for one of our clients, which now enjoys a 5 star rating in both the App Store and Google Play Store.

We’ve used several techniques to nudge the app into such positive territory.

On iOS, we removed the stock iRate plugin in favour of our own solution. The standard module had gained us nearly 5000 reviews and a four star rating, but we changed it for something less complicated, and which gives us a little more control. For example, we only show our rating prompt to users after the user has done something intrinsically rewarding. Asking for a rating when you are confident the user is in a good mood is likely to garner more positive responses (eg. in a fitness app, you could ask when they’ve just set a new personal best).

We also ask the user to give us five stars (politely of course), rather than asking them to rate the app. A subtle language change, but a helpful one – this spot of social engineering helped us make a real difference. After going live with the new rating engine, we received an additional 1781 new reviews in just one week, with an average of 5 stars. And at the time of writing, we now have over 34k reviews – with the app still rating at 5 stars overall.

With this new ratings system in place, and with users clearly feeling positive about the app, the last thing we wanted to do is annoy them. So the development team also created an algorithm which monitors how and when we’re asking users to rate their experience, ensuring no user ever feels like they’re being nagged (a common cause of negative sentiment).

In a crowded marketplace, a strong user rating is a key aspect in the success of your app – so it pays to take it seriously from the start. Developing an app is like any other evolving, iterative piece of software, except the feedback is especially public, and potentially damaging. When project planning, we recommend you consider apportioning a percentage of time to address feedback as a matter of course.

More positively, by demonstrating that you are listening to your audience and by carefully considering how and when to encourage reviews at just the right moment, you can make real strides in improving how your users feel about your app – and consequently, your business.